What to see and visit in Orihuela Costa

Orihuela Costa is a spectacular setting in which you can relax by the sea or practice all kinds of sports, but there are also many activities and attractions in the surrounding area, so visitors will enjoy every single day of their stay.

In addition to its beautiful beaches and walks, another attraction is Cabo Roig tower, the most prominent monument of Orihuela Costa. It is located near the beach of the same name, and consists of a military tower built in the 16th century to prevent attacks from pirate ships. Its structure allowed a broad view of the coast and it is a point of great cultural interest in the city.

The city of Orihuela is known for its cultural wealth, and its patrimonial heritage includes churches, palaces and museums of great archaeological and artistic importance. To get to know the city, we propose two routes, the Monumental route and the Miguelico route:

The city of Orihuela is known for its cultural wealth, and its patrimonial heritage includes churches, palaces and museums of great archaeological and artistic importance. In its old town, declared a Historic and Artistic Monument Complex in 1969, are many fine buildings, and five of them have been declared national monuments:

Puerta de Crevillente is the only gate-type monument in Orihuela still standing after the collapse of the walls. Of Almohade origin, the surface of the gate displays the city’s shield and the image of San Miguel (Saint Michael), protector of the city.

This former Santo Domingo convent, built in Gothic style, was founded by Cardinal Loazes. It covers a surface area of 15,000 square metres, making it the largest monument in the Valencian region.

The Easter festivities in Orihuela are declared to be of International Tourist Interest and this museum, located in the heart of the Historic Centre, exhibits works from notable artists such as Salzillo, Quitín de Torre, Coullaut Valera, Sánchez Lozano and Bussi among others, and it also houses the Santo Entierro (Holy Burial) procession float.

The cathedral of San Salvador is one of the cathedral headquarters of the diocese of Orihuela. It is equipped with a belfry called La Torre (The Tower) ― which is the oldest part of the cathedral ― three main doorways with beautiful chains and various chapels that are open to the public.

Situated in the Old Town we find the Episcopal Palace of Orihuela. Declared a National Monument in 1975, today it is a museum that houses the most important work of Diego Velázquez, La tentación de Santo Tomás (The Temptation of St. Thomas).

Of great architectural value, the remaining part of the old city walls is declared a Site of Cultural and Historical Interest of Spain. The museum contains the ruins of ancient Arab dwellings and it can be visited at the Miguel Hernández University of Orihuela.

The Catholic church of Saint Justa and Rufina was built in the Gothic style in the 14th century. It consists of a central nave and two side chapels, two doorways built in different periods and a belfry that boasts one of the oldest pieces of clockwork in Spain.

The Archaeological Museum of Orihuela is housed in the former San Juan de Dios hospital, which was restored in 1997. In it we can find a variety of regional and local materials from the Palaeolithic period up to the early 19th century.

Built in the 15th century, the church of St. James the Apostle is a Catholic church with similar features to the church of Saint Justa and Rufina. The style of the main doorway is Isabelline Gothic, whilst the side doorway is Baroque, which gives access to the chapel and the tower, where the belfry is located.

Orihuela Castle, also known as the Castle of Glorious Ruins, is situated on the hill of San Miguel, at an altitude of over 200 metres. During the Spanish War of Succession, a huge explosion, caused by a lightning strike, destroyed the castle and, finally, after various storms throughout the 17th century, the earthquake of 1829 caused the collapse of the building, making restoration impossible.

This route takes you through the historic part of the city and is centred on the life of the poet Miguel Hernández, who was born in Orihuela. You can start the route at the Fernando de Loazes public library, where the historical archives are held and where we can learn about the poet’s work and career. After this, you can visit the Miguel Hernandez House-Museum, the exhibition hall, and lastly the Centro de Estudios Hernandianos (Miguel Hernandez Study Centre). 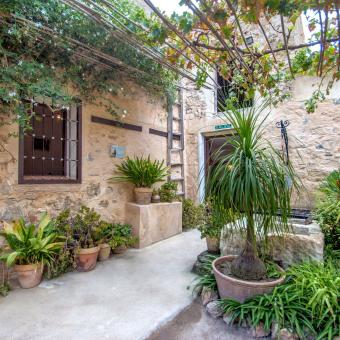 THERE IS STILL A LOT TO DISCOVER

Other places of interest in Orihuela

Considered the second largest palm grove in Europe, of Islamic origin and located near the Sierra de Orihuela mountain range, this forest has great scenic value and is unique on the continent.

The Sanctuary of Monserrate is found on the outskirts of Orihuela and houses a statue of the city’s patron saint in its interior. It is Baroque in style and has great architectural value.

The circus-theatre was built in Alicante in 1982, in which numerous acrobatic shows were held. In 1907 it was moved to Orihuela, and constructed mainly with Alicante roof tiles. In 1995 it was inaugurated by the Queen Consort of Spain and is currently used as a multi-purpose space.

The Convent of the Trinity is a Renaissance-style building, which was partially destroyed by an earthquake in 1829. It is currently occupied by Dominican nuns who, took refuge and established their community there after the Civil War. It is a site of great interest due to its buildings and the shop selling the pastries and sweets that the nuns continue to make there.

Los Saladares is the remains of one of the first settlements in Orihuela. The site was discovered in 1968 and is of great archaeological interest in the province of Alicante.

The Royal Monastery of the Visitation of Santa María, located in the heart of the Old Town, has great historic interest as it is a neoclassical religious building of great quality. It was declared a historic monument in 1969 and houses a large collection of works signed by the painter Vicente López.

This palace is a monument of Baroque art, which is open to the public and contains furniture from the period. You can see paintings by important artists of the time, such as Federico Madrazo and Francisco Bayeu.

Ruvalcaba Palace was built in 1932. It has great architectural interest and is currently home to the main tourism office of Orihuela, with major events being held here. It has three floors, all of which are open to the public. 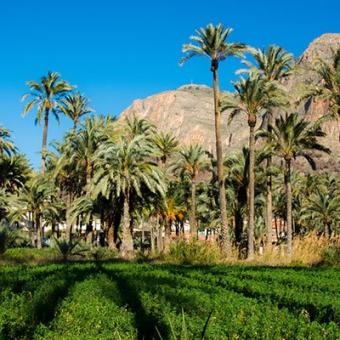 It is also worth visiting some of the local markets, which stand out for their colourful array of goods and the variety of products they offer. Here are two of the main ones:

Every Saturday, near Flamenca beach, one of the largest markets in the region is held. Visitors can find this flea market near Nicolás de Bussy Street. Among its most popular stalls are the food stalls, where you can buy typical products from the region and, of course, there are the traditional sweet stalls, and stalls selling clothes, shoes, bags, etc.

Aguamarina market is held every Thursday throughout the year in Fuego street, near Aguamarina beach.

This market is smaller than the Flamenca beach market. You will find various stalls selling local food products as well as clothes and shoes. At each end of the market there are bars and terraces where visitors can enjoy a fine breakfast or lunch. 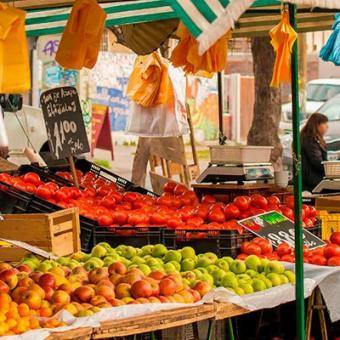 THE BEST ALTERNATIVE FOR YOUR PURCHASES

Other places of interest near the city

Along with all the activities that visitors can enjoy in the area, it is also worth visiting one of the neighbouring towns, which also offer plenty of activities and interesting places to see, including the following:

Torrevieja is a city in the province of Alicante just 10 km from Hotel Servigroup La Zenia. It has great ecological and scenic value, being on the shores of the Mediterranean Sea. The city offers beautiful beaches and coves and large nature parks such as The Salinas os Torrevieja, as well as a wide range of options as regards leisure, restaurants, shops, etc.

Elche, situated 50 km from Orihuela, is the third most populated city in the Valencian region. Worth a visit is Elche’s Palm Grove, which has a total of 200,000 palm trees, making it the largest in Europe, and the historic centre of Elche, where you can discover the city’s rich historical heritage. There are also various museums whose contents have undeniable appeal for visitors.

Situated 40 km from Orihuela, the town is dominated by its historical remains, which include Santa Pola Castle and the Molino de la Calera (La Calera Mill), its port, from where the Moors were expelled, its salt works and its gastronomy.

Tabarca is an island located 22 km off the coast of Alicante. It can be accessed from the port of Santa Pola (this being the closest to Orihuela), Alicante or Benidorm. It has a museum with displays on the heritage and environmental assets of the island, and is a great spot for snorkelling and scuba diving as its located within a marine reserve. Beaches surround the island and it is a unique place in the whole of the Valencian region. 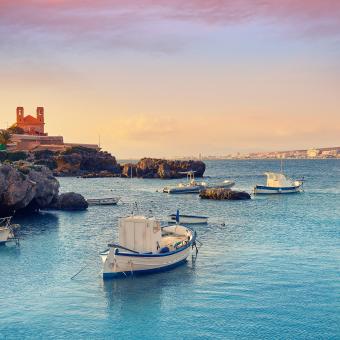 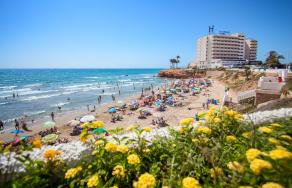 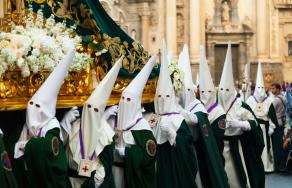 Sports and activities in Orihuela Costa

How to arrive to Orihuela Costa 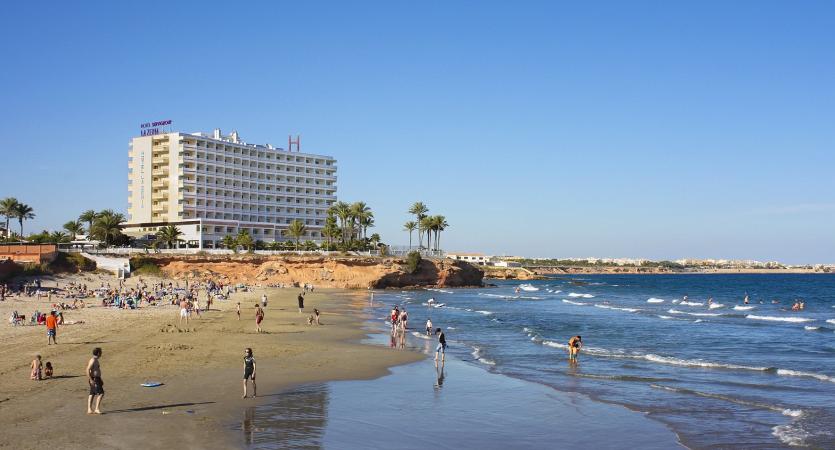