Towers and Castles near to Mojácar. Are we going on an excursión?

As you may know, the Almeria Coast as well as being famous for its extraordinary microclimate and beautiful beaches, leaves behind a very important historical past that provides major attraction for your visits to the area.

There are some intersting monuments that enrich and “put the icing on the cake” in this area that you may choose to spend your holidays and weekend getaways.

At the hotels Servigroup Marina Playa and Servigroup Marina Mar, requests for information about towers and castles near to Mojacar are becoming more and more frequent in both high and low season, as well as directions on how to get there.

In this publication we are going to propose a visit to three of the most iconic and popular towers that you can easily reach form the beaches of Mojácar. We are talking about the Macenas Tower, the Villaricos Tower and the Batería de las Escobetas. 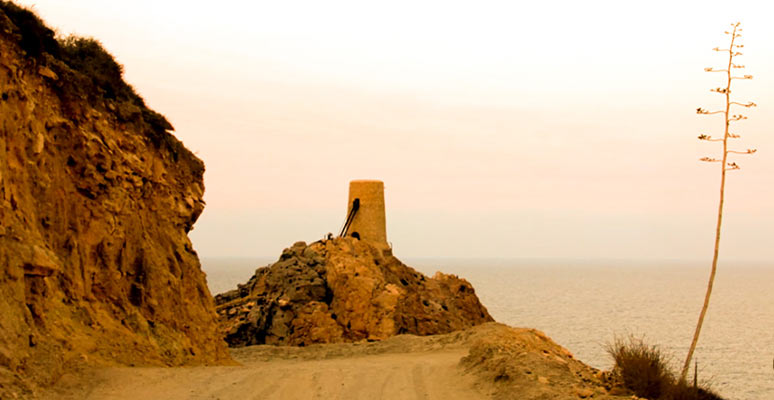 This construction from the second half of the XVIII century is situated on the popular Macenas Beach.  It was built in 1774 on top of a previous tower, occupying the same Rambla de los Moros.   On it, you can see a tower that was made with a capacity for two cannons, which on several ocasions had to be put in motion to fend off enemy attacks.

Belonging to the same municipal area of Mojácar, we can boast that we contuinue to maintain this Almeria monument (also known as the Macenas Castle) in an excellent state of conservation, up to the point of being declared property of cultural interest in 1993.

On the well-known Bolmayor Beach, walks are very typical, especially during spring and autumn.  It is a route that ends at the castle, situated at the end of the beach. The walk to the watch tower at the view point of the Macenas Beach is also very popular.

This beautiful landscape was once again chosen as the backdrop for a cinema classic in our country.  On this occasion, it was the  Argentinian director Adolfo Aristarain who chose the exterior of the Macenas Castle in Mojácar as one of the locations for his movie Martín Hache (1997) starring Juan Diego Botto, Federico Luppi and Cecilia Roth .

If you are wondering how to get to the Macenas Castle on the Almeria Coast, you would need to take the road from Mojácar to Carboneras and after 15 minutes you will see this pretty castle. 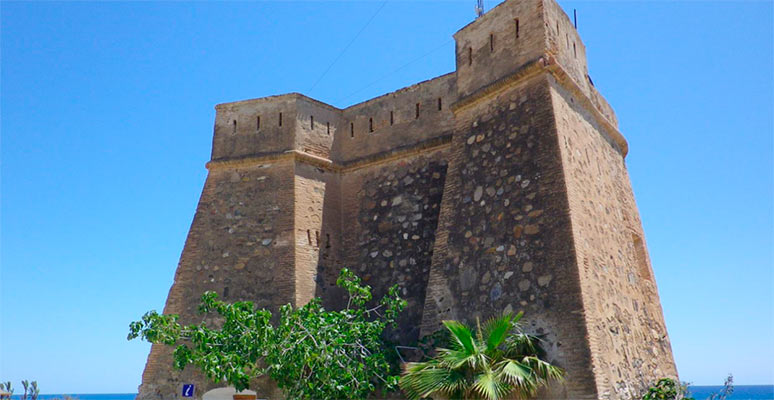 Also very popularly known as the Glass Tower of the Almeria Coast, it represents a legendary construction of 1763.

It is a fortress situated just before the popular Villaricos Beach, exactly at the height of the mouth of the Almanzora river.

The Villaricos Tower was created exclusively for surveillance purposes, in order to guard against threats from the berber pirates

Should you decide to visit this unusual and attractive castle in the shape of a horseshoe, we recommend that when you exit the Marina de la Torre Urbanization in Mojácar, you take the A-1203 road in the direction of the A-7 motorway.  You will reach a point where in order to continue your journey, you need to take the Granada road until you reach the caves.

It is a modest castle, but you will love its relaxed and picturesque charm. 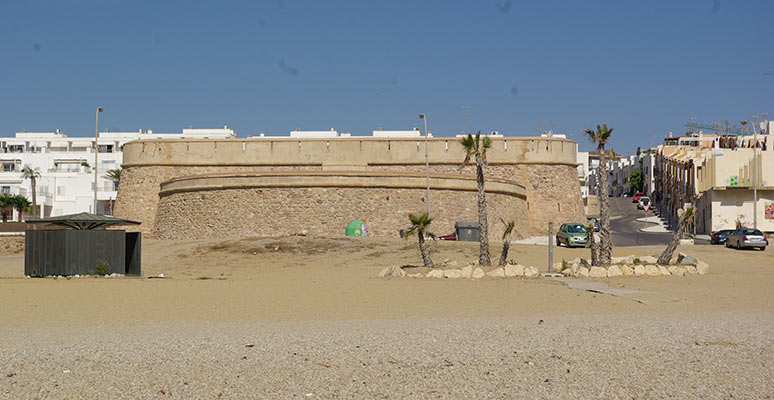 La Batería de las Escobetas in Garrucha, also known as the Batería de Jesús de Nazaret was also built during the second half of the XVIII century. The aim of this new architectural construction consisted once again in the prevention against constant attempts of military attacks by tropos from North Africa.

Built at what today is the entrance to the neighboring town of Garrucha, the Bateria de las Escobetas is another monument most visited by tourists who choose the beaches of Mojácar as their holiday destination. Therefore, if you are a regular guest of ours, this fortress will be more than familiar.   On the other hand, you can’t miss it as it is very near to our hotels.

It is built on a circular enclosure that highlights a pretty inner courtyard. Your attention will be drawn to its two semicircular towers and large battery which was built to have a capacity of up to six cannons, always on guard against Berber attacks

After suffering a hard and catastrophic confrontation trying to stop the historical disembarkation of the Cantores de la Fragata Tetuán and the battleship El Despertador, the Battery of Garrucha was another construction that was passed onto the hands of the Guardia Civil.

You may already know that at our hotels in Mojácar, options for your leisure and entertainment are endless. Therefore, should you intend to visit any of these beautiful monuments, you will find them very near to our hotels.  We will contuinue to offer more alternatives of this kind in forthcoming publications.

Are we going on an excursión? 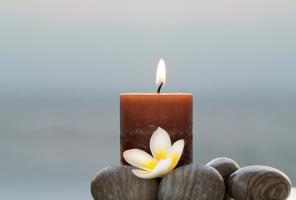