Everything you need to know about Fallas

Whether you know the Fallas or not, you will surely have a thousand queries, of what to do or curiosities to clear up about this unusual fiesta. Do not worry, if you want to know more and ease your doubts you just have to keep reading.

UNESCO has declared this festival an Intangible Cultural Heritage of Humanity, and there are many cities that celebrate Fallas and the fiesta of San José in the province. And of course, Benidorm, a festive town par excellence, also celebrates these days with great fervour. So, to be sure you do not miss anything, we offer you the best Hotels in Benidorm so you can enjoy this big fiesta of the Valencian Province.

We provide you with 10 guidelines, with which you will have everything you need to know about the fallas, and this live them 100% during your visit.

Therefore, if you have ever wondered or are asking yourself some questions about this particular fiesta, you are in luck, we give you the answers you need. 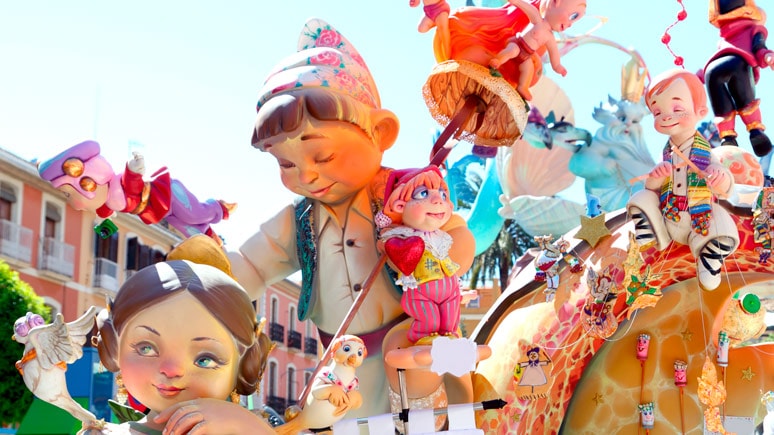 The Fallas are the festivities, held in honour of San José, which take place from March 15th to 19th in the Valencian Community. A very deep-rooted festival among Valencians that combine art, effigies, entertainment, music, fireworks, lights, fire... days when people take to the streets to celebrate and enjoy to the max.

2- What is the origin of the Fallas?

There are many hypotheses in this regard, but the most widespread is that which says that the carpenters union took out the parrot (stick that held the oil lamps so as they could work during the hours without light) to the streets and courtyards, along with furniture and any old junk they had, they piled them up to burn them on the eve of San Jose, and commemorate the festivity of their patron saint.

From the wood, cardboard, fabrics, clothes and paper of its beginnings, the fallas have evolved into the great effigies/sculptures of more than 30 meters high, created by Artists falleros, with satirical statues made of cork or cardboard that we can admire today. 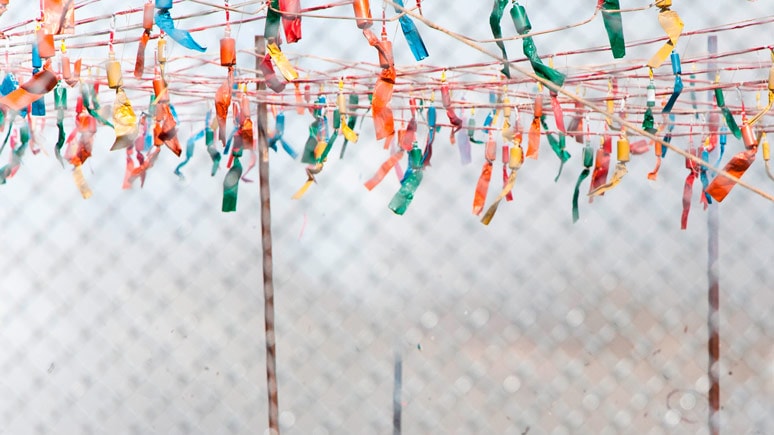 3- What words should you know to enjoy the Fallas?

If you want to understand the fallas you should know their language or jargon, we give you a list of the words that you will have to take into account.

Falla: Although this fiesta is called Fallas, the falla is the name of the singular effigy/statue.

Plantà: is the name given to the act of assembling and raising the effigy/statue of the falla.

Ninot: name given to the figure of satire or mocking, that a human character represented in a falla is called.

Cridà: this is a call made by the authorities and the falleros / to the citizens and visitors, so that they go out to celebrate the fiesta of the Fallas.

Mascletà: do not confuse it with fireworks, the mascletà is one of the most important acts of Fallas. The word comes from masclets, which are a type of firecrackers with a very loud sound capacity. A pyrotechnic show in which thousands of kilos of gunpowder are used, in the form of firecrackers, which are lit varying in frequency, rhythm and intensity until their final apotheosis. They can include colour and sometimes music. The important thing in this act of short duration (between 5 and 7 min) is the thunderous sound reaching over 130 decibels. When you see the mascletà you will feel your whole body vibrate, a unique experience that you will never forget.

Despertà: the falleros and falleras walk through the streets of the towns and city at 8 in the morning, accompanied by a band, while throwing firecrackers and wake up the neighbours so that they take to the streets to celebrate the fiestas. 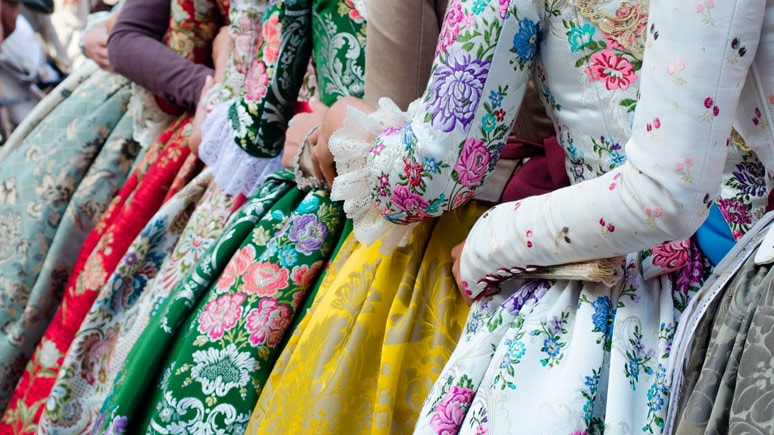 Ofrena: In all the municipalities the flower offering is celebrated, where the falleros and other citizens dressed in typical traditional costumes will give gifts to their patron saint.

Nit del Foc: it is the night in which the longest fireworks display of all the Fallas can be watched, it takes place in the evening/night before San José (Saint Joseph’s day).

Cremà: this act is the most significant of all and with which the festivities end. It is the late night/early hours of the morning of the 19th, when the beautiful monuments are burned.

Comisión fallera: are groups of people who join together to sponsor a falla, these commissions are usually linked to the different neighbourhoods of the towns and cities where these fiestas are celebrated.

Casal: Casal fallero is the name of the place where the different commissions meet during the year and especially in time of Fallas, to prepare and to enjoy the celebrations. Let's say that they are the neuralgic centres of the commissions, places where you drink, eat, dance and meet the fellow falleros and visitors. 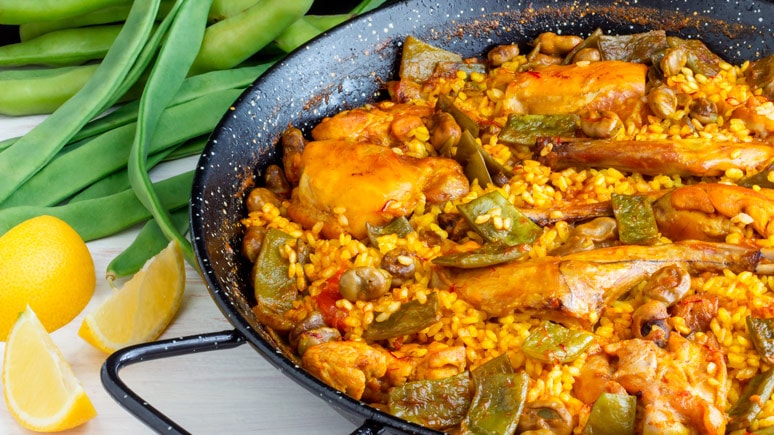 During the Fallas there is not only one fallero effigy, there are hundreds of neighbourhoods, from different towns, that mount sculptures to participate in the celebration. Each year among all these effigies, by popular vote, a statue is pardoned in the children's category and another in the main category, which is saved from the flames in the great night of the Cremà. The ninots indultats of the city of Valencia can be visited in the Fallero Museum of the capital, while in the municipalities, these ninots are usually a gift from the commissions to their Falleras major and children as a souvenir for their year of reign.

5- What is represented in the Fallas effigies?

Fallas are usually large sculptural pieces where society is represented satirically, they often include political issues, the famous, the world of sports and up to date news. Effigies full of dolls or caricatured pieces, with a motto or catch phrase, in which their staging’s are accompanied by small posters with mocking phrases of jocular character.

6- Why are the fallas burnt?

The Fallas are ephemeral artistic works; throughout the year, the falleros hold events to raise money and to plant their fallero monument in March, even knowing that it has a short life and that it will be burned on Saint Joseph’s Day. From the beginning they were burned, because fire means a catharsis, a renewal... The burning of the bad to pass to the good, to a new epoch, to the spring... It is definitely a purifying act.

7- What kind of suits are worn by falleros and falleras, why are they dressed like that?

The clothing of the falleros and falleras during the festivities, is the regional costume inspired by the ones worn by the farmers in the sixteenth century. A dress that has gradually been transformed and updated. The women's dresses are made up of a petticoat and a skirt (of brocade silk fabric with antique prints) an apron, a rigid bodice with sleeves up to the elbow with cheesecloth, silk or cotton socks, gold or silver combs, clips (skewers and runners that hold the side ribbons to the traditional faller hair), the joia, the necklace and earrings. While the male suit called zaragüell consists of shirt, zaragüells (kind of calzones), bold (dark overskirt) stockings, esparto espadrilles, sash, vest, head scarf and blanket. 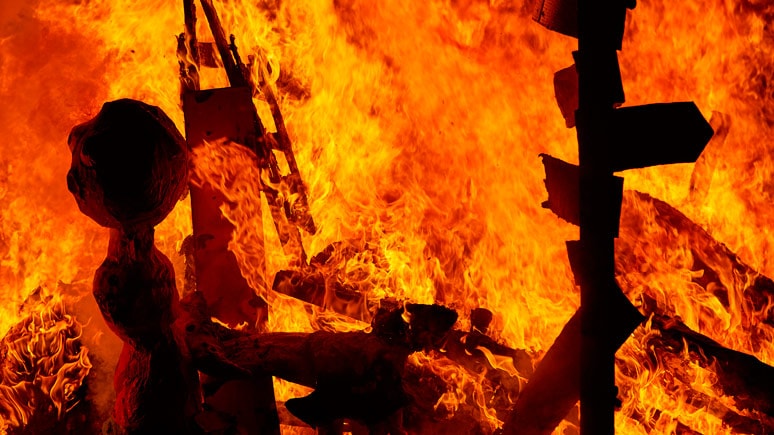 8- Can anyone go to fallas without being a fallera? How can I feel integrated if I go to them?

Of course, you can go to fallas without being a fallera! These fiestas are enjoyed in the streets, and are open to everyone. You can attend the different acts and shows of these curious fiestas but if you want to be a fallero you only have to sign up for one of the commissions, pay the established fees and attend the different events that take place during the year. If you want to feel integrated, you must buy a fallero handkerchief; which you can find during fiestas in the different street market stalls, a blue and white handkerchief that is tied around the neck and serves to protect you during the mascletà, the Cremà, etc. and if you want the complete set, wear it with the typical black or striped blouse, you will feel just like another fallero.

9- Is there a typical fallera meal?

In Fallas you should not miss the chicken and rabbit paella, delicious rice dish that will help you regain strength during the fiestas. A very Valencian custom is the almorzaret which consists of meeting friends for a mid-morning snack at 10:30 or 11:00 AM. to eat a roll, the most typical being blanc i negre (black pudding and sausage) accompanied by salad, peanuts and olives. Nor should you resist the tradition of breakfast or a snack, delicious pumpkin fritters with chocolate that you can buy at the various stands located in the streets.

10- Why are these such attractive fiestas? Why should you not miss them?

They are fiestas that take place on the street, everyone is welcome, they are very striking, with their big and colourful statues, the sound and the smell of gunpowder that floods everything, along with the music of bands and orchestras that continues 24 hours a day; the street lights, the gastronomy, the cloths, the atmosphere... In short, the imposing sum of art, fire, beauty, pyrotechnics and brilliance that make this traditional festival a street experience that will thrill you.

I'm sure you now want to live this experience. Now you know everything you need about this fiesta, come and enjoy the Fallas 2019 in Benidorm with Servigroup, it will be unforgettable... 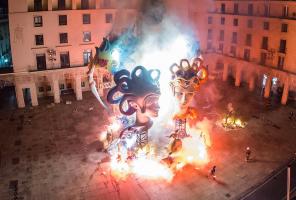 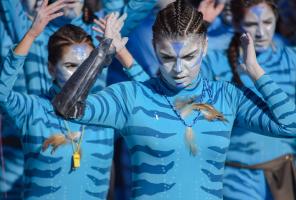 Festivities
Discover the best carnivals in the Valencian province 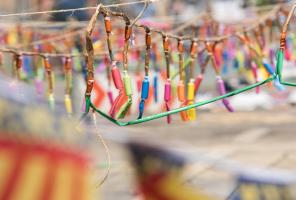