The origin of a very authentic festival

What is celebrated in the Benidorm fiestas? Legend has it that 279 years ago a small unmanned boat washed up on the shores of Benidorm. Fearing that the cause was the plague, the authorities decided to burn the boat and, surprisingly, after the flames were extinguished, a carving of the Virgin was found among the ashes, which came out of the fire completely intact. This miracle is commemorated every year in November, coinciding since ancient times with the celebration of the return of the fishermen to the town of Benidorm to meet up with their families after a long summer season at sea.

Nowadays, this discovery continues to be commemorated, bringing together all the Benidorm locals and the thousands of tourists who are on holiday in Benidorm or who come to enjoy a weekend break to take advantage of these special days from 12th to 16th November during the Patron Saint Festivities.

For these new Fiestas Patronales de Benidorm 2022, we have prepared many surprises that will be part of the new programme of activities after two years of absence. The traditional fair is back, where young and old can enjoy attractions for all ages, you can have a great time with the new musical events and concerts, you'll laugh out loud with the parade of humour, you'll see the traditional multicoloured parade of floats and you can also experience the best party of Benidorm's peñas. 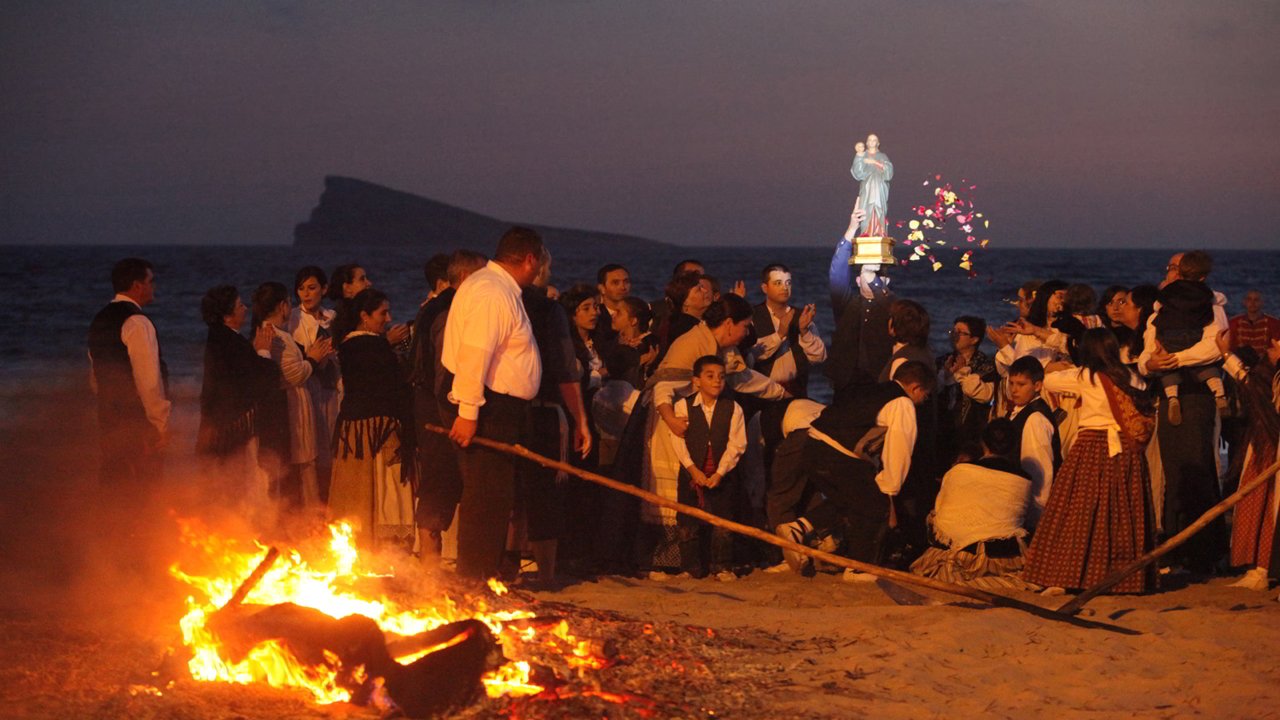 It will be next Friday 11th November when it all begins and, at the same time, the capital of the Costa Blanca will be transformed into a coming and going of parades and processions with the music of the bands as a backdrop. All accompanied by the traditional smell of gunpowder, without which the Benidorm Fiestas would be inconceivable. The kick-off will be at 18pm, when the city's artistic lighting will be inaugurated in the popular Martínez de Alejos street, in the centre of Benidorm. It will be the new Queens of the Fiestas who will be in charge of this event, who together with their Courts of Honour will give you an emotional and very pleasant time.

As every Friday of the fiestas, with the arrival of dusk, the official inauguration of the new fair of mechanical attractions will take place in the Benidorm Fairgrounds. In addition, there will be very low prices so that you and your loved ones can enjoy the attractions of the fair.

Attractions such as the witch train, the classic merry-go-rounds, fun bumper cars and a daring Ferris wheel will make the festivities the most fun part of your holiday afternoon, whether you're with children or not. And, by the way, we recommend that you don't leave the fair without trying the delicious stuffed potatoes, or the different varieties of churros or roasted chestnuts on offer, which are very popular with the Benidorm locals who come to the fairgrounds during these days. 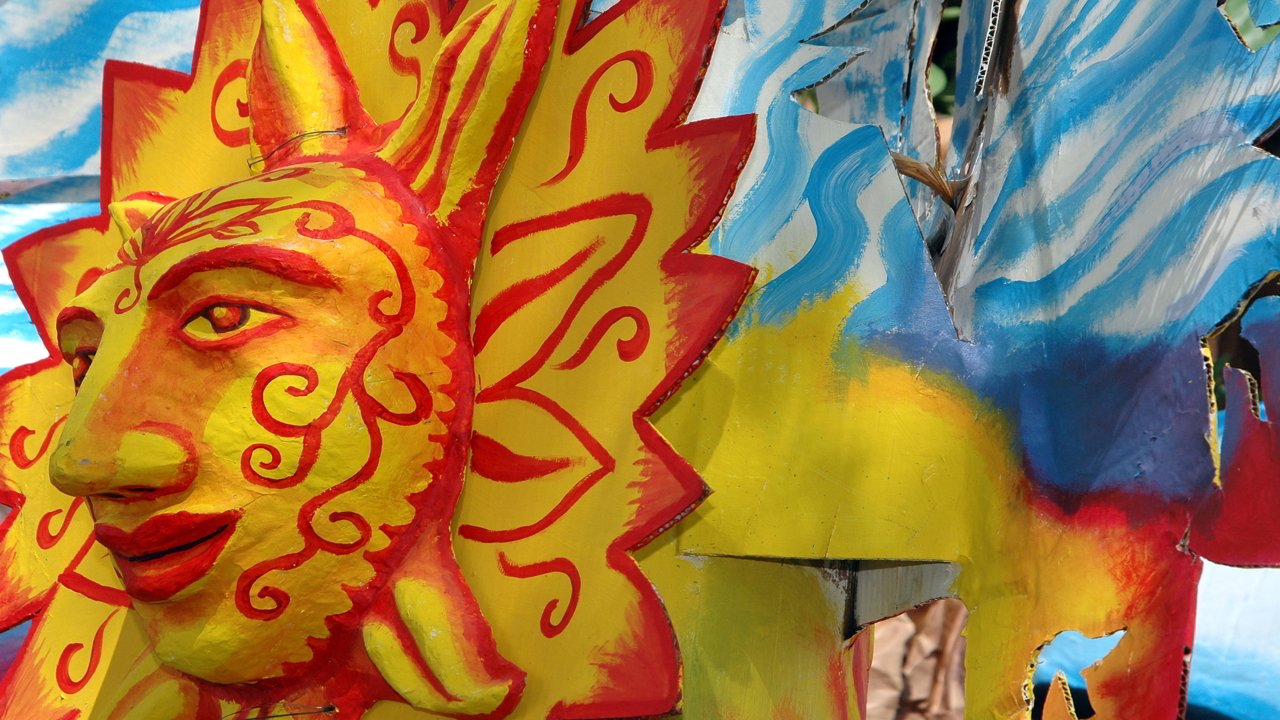 The popular presentation of Peñas (clubs) in Benidorm Fiestas

It is said that the fiestas don't really begin until it's time for the extravagant and fun-filled presentation of Peñas Sufragio Virgin. This is a spectacular march in which all the penyes groups belonging to the Benidorm’s Peñas Association de Benidorm take part. In it, the participants inaugurate the new patron saint's fiestas with great joy and euphoria.

It is a very symbolic and fun event, both for participants and attendees, and at the same time very representative of Benidorm in fiestas. Without a doubt, we recommend it to get you warmed up, and afterwards to continue with the great party atmosphere in the peñas - which are the associations of friends or families who organise the fiestas - in Benidorm.

The parade will start at 22h from Ruzafa Street and end in Calle Martínez Alejos. There, the Fiestas Commission will be waiting for the peñas to hand over the flags, banners and ties which will then decorate the festive atmosphere throughout the night. 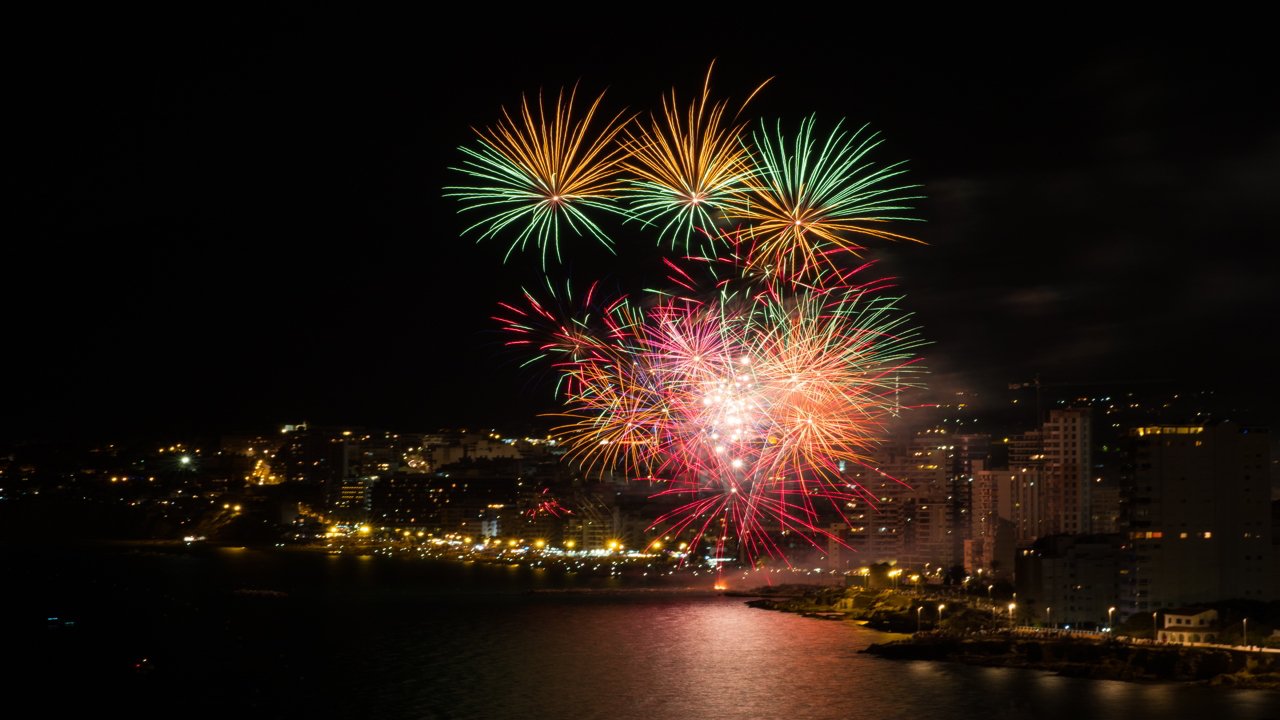 Staging of the Finding of the Virgin of the Suffrage

Declared of Tourist Interest in the Valencian Community, this staging will allow you to travel back in time to the year 1740, where you can witness the legendary event in which three sailors from Benidorm found a ship adrift without a crew. Fearing that the lack of crew might be due to the plague, the authorities decided to burn the ship. Once the flames were extinguished, some boys found a carving of a virgin among the ashes, which emerged completely unscathed from the fire. From that moment on, the Virgen del Sufragio became the official patron saint of fishing Benidorm in the mid-18th century.

This moving theatrical performance, which commemorates that discovery and the miracle of how the image survived the flames, will take place on Benidorm's Poniente beach on Saturday 12th at 17h. 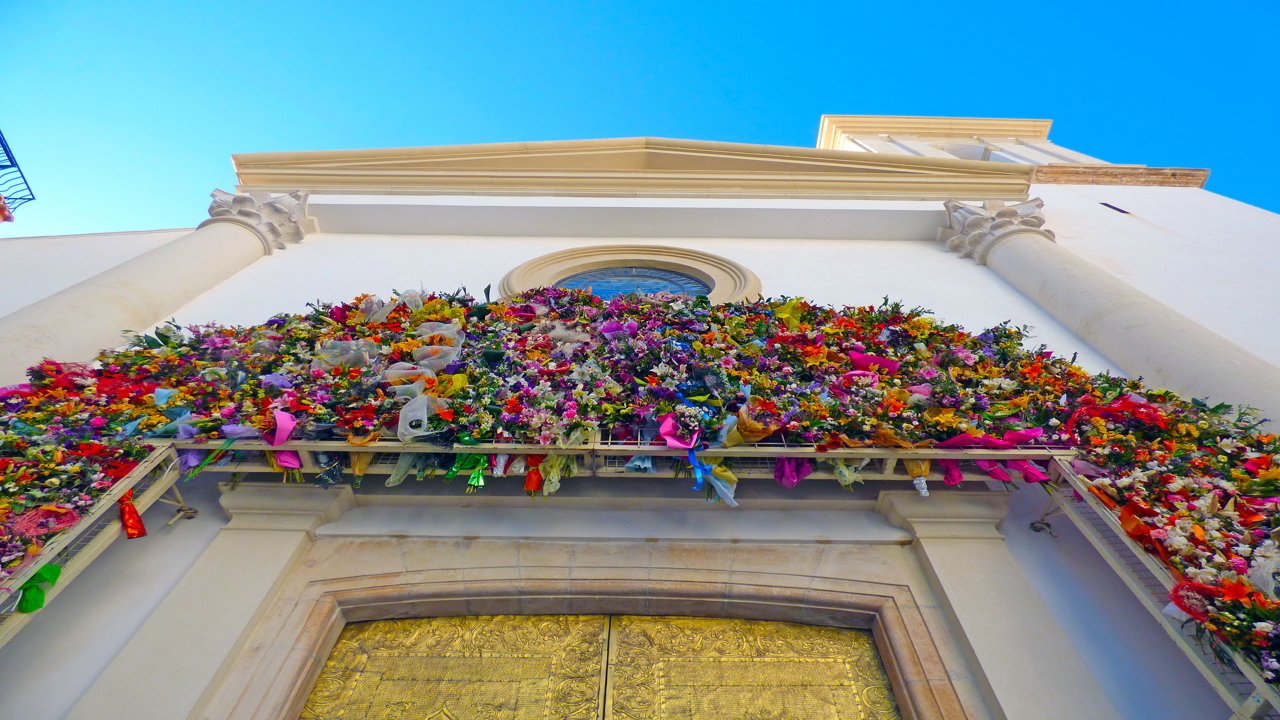 Offering of Flowers to the Virgin of Suffrage

This is a solemn pilgrimage that will take place on Sunday 13 at 18:30h from the Parque de Elche to continue along the Paseo de la Carretera, the popular Alameda del alcalde Don Pedro Zaragoza Orts and the Calle Mayor and culminate in the Plaza de San Jaime, at the gates of the church, where the flowers will be presented to the Virgen del Sufragio.

Every year, the most popular bands play their part in the Benidorm Fiestas. Artists and groups such as Fangoria, Revólver, Seguridad Social, Melendi, La Casa Azul or Ximo Bayo have performed in Benidorm during the Fiestas.

This year in the Plaza de SS.MM. Reyes de España will continue to be the place chosen so that you can dance and sing along to the songs of the most renowned groups on the Spanish national scene.

The performances will start on Saturday at 23:30h with the great concert of the group The Gafapasta, in the Plaza de SS.MM. los Reyes de España.

On Sunday, in the same place and at the same time, it will be the turn of Maxims Orquesta Show, who will make you vibrate and dance non-stop with a review of their great songs.

In addition, every night different orchestras will entertain the audience and many of the peñas also invite all visitors to enjoy events, concerts, charangas in Benidorm during these days.

Concerts that will make Benidorm residents, locals and visitors vibrate during the Benidorm 2022 Patron Saint Fiestas. 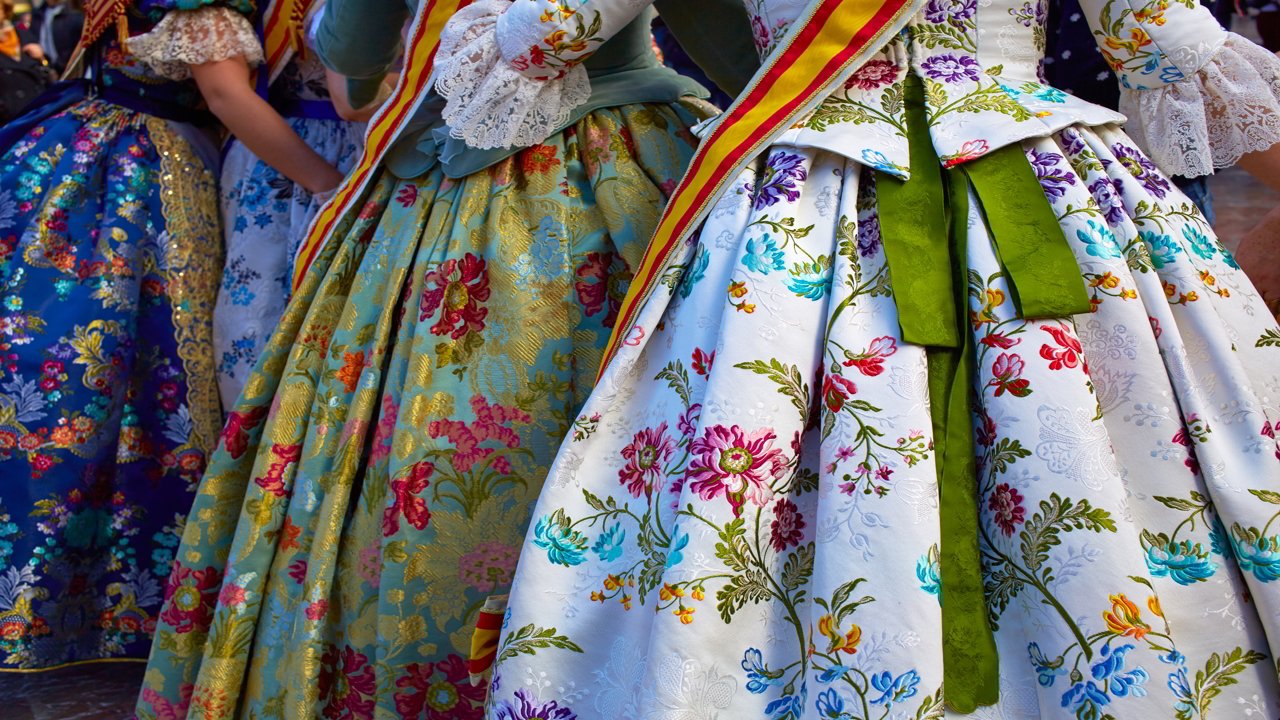 Don't miss the Parade of Humour

Benidorm's popular Parade of Humour is one of the most characteristic events of the patron saint's fiestas.

It will be held on Tuesday 15th at 19h. Its aim is to make you laugh to the rhythm of the most ironic parodies and satires, always making direct reference to current political and social issues.

On this occasion, there will be four winning peñas, which will be selected after a meticulous decision by the members of the jury. The prizes will range from 1,000 to 400 euros.

The Closing of the Benidorm Fiestas: the Multicolour Parade of Floats and the traditional Fireworks display

These are two of the most spectacular events of the Benidorm Fiestas, which will take place on Wednesday 16th from 18h. For the parade of floats, the participating peñas spend a large part of the year planning a work of craftsmanship which always has the firm aim of surprising the jury and winning one of the two most important awards. These are the first prize and the prize for the Benidorm Fiestas artisan float.

In this case, the participants usually make use of their greatest ingenuity to represent current affairs, in many cases paying homage to cinema and television.

The route will start in the Avenida de Alcoy and after going through the main streets of the old town will reach the Parque de Elche. 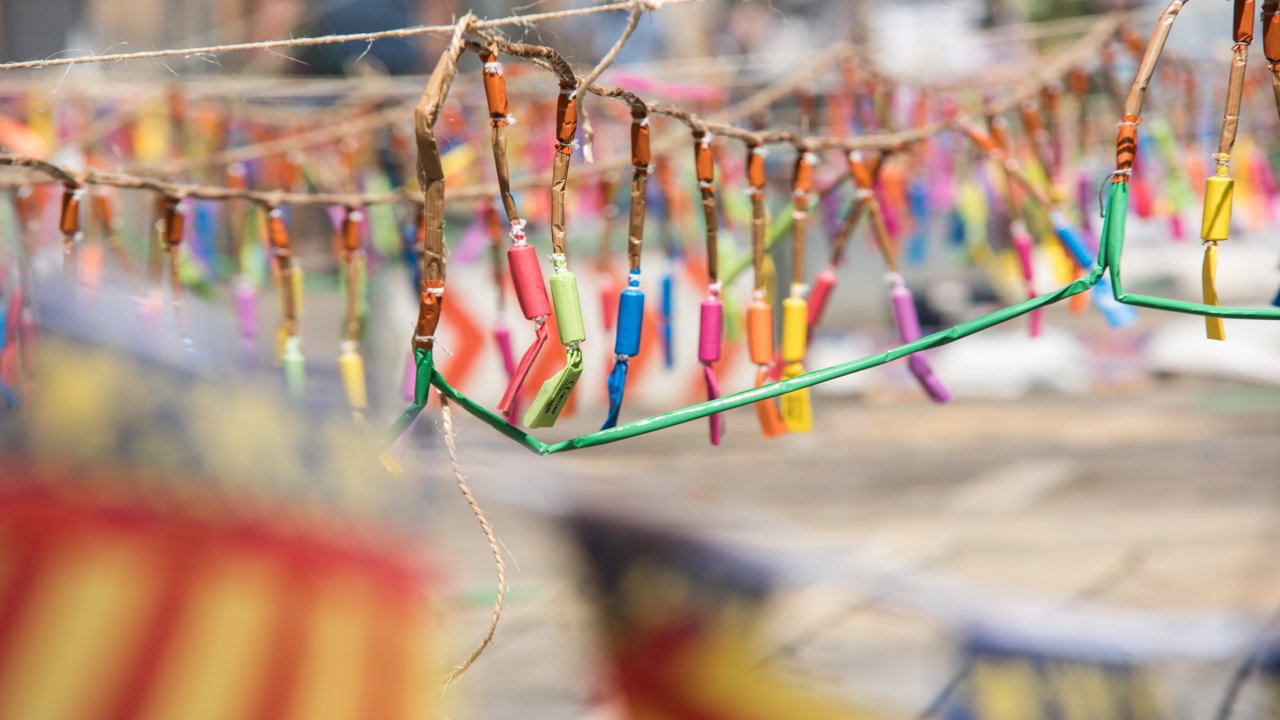 Although not part of the official party programme and organised completely independently, you can continue the party vibe with a spectacular tribute to Benidorm's British public on the Levante beach area.

The Fancy Dress Party in Benidorm takes place on Thursday 17th November and attracts thousands of people of British origin to celebrate their own parties in the town, because Benidorm belongs to all of us who love it! 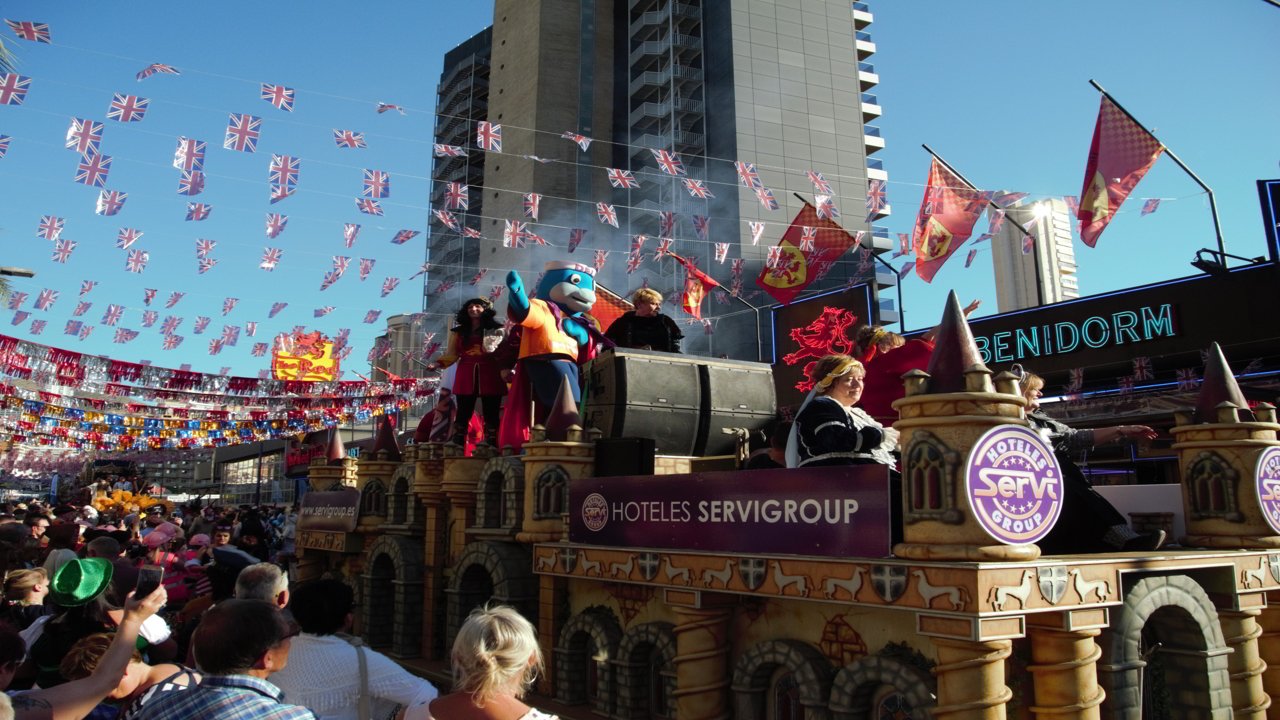 Are you coming to Benidorm's Fiestas Patronales 2022? We're waiting for you! 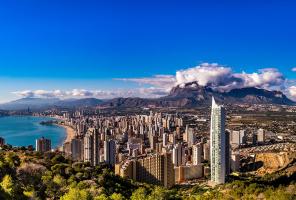 Proposals
The 7 tallest buildings on the Benidorm Skyline 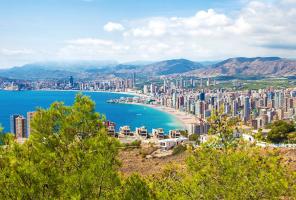 Proposals
How much do you know about Benidorm? 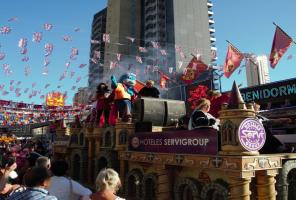