La Via Verde del Mar, a natural route between Benicasim and Oropesa

Connoisseurs say that the Costa de Azahar still preserves some of the most virgin stretches of coastline in the Mediterranean. It is that, although this area of the province of Castellon comprises of many of the most popular tourist areas in Spain, with extensive white and golden sand beaches and endless leisure activities, it also boasts places of enormous beauty and environmental value in which the hand of man has not yet made any dent. 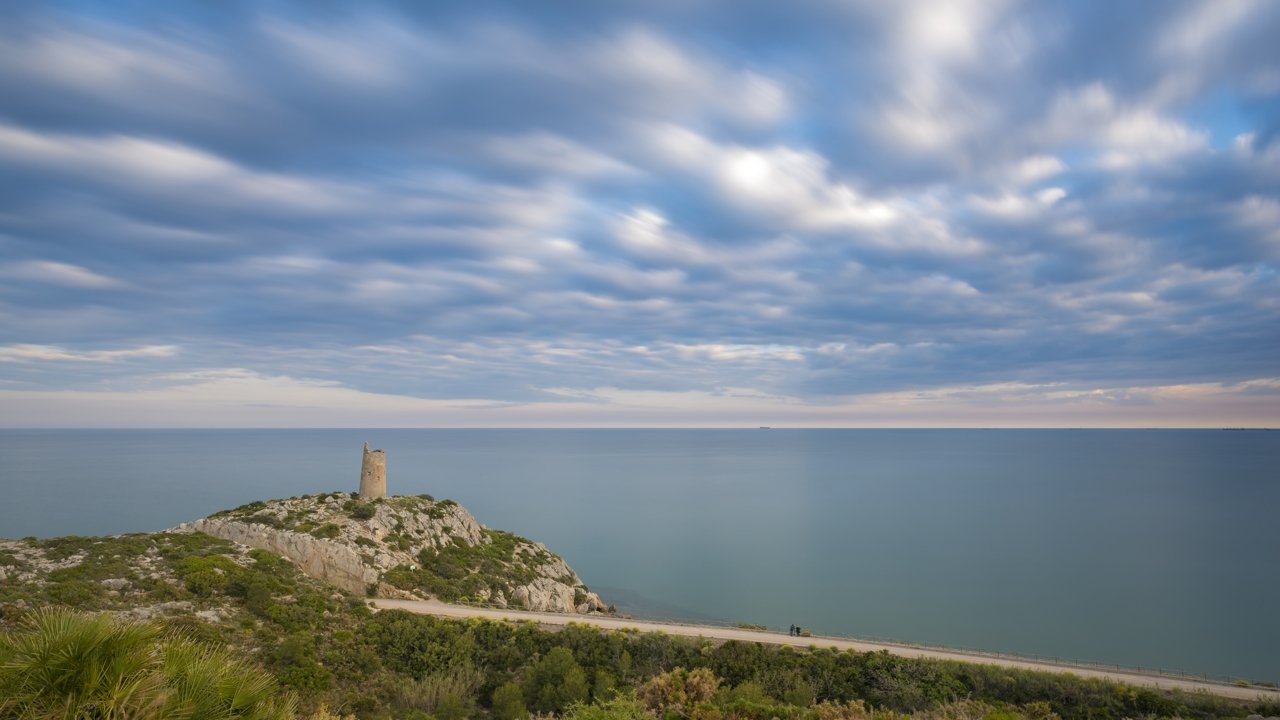 Who can forget the journey to the Columbretes Islands? Also, the deserted coves of the Sierra de Irta? The province of Castellon offers endless options for those who are not satisfied with just lying on the towel by the sea. Today we want to offer you a walk or bike ride surrounded by nature with a surprising route that joins the municipalities of Benicàssim and Oropesa del Mar along the old train route.

Remember your trainers and camera ... Don't miss this! 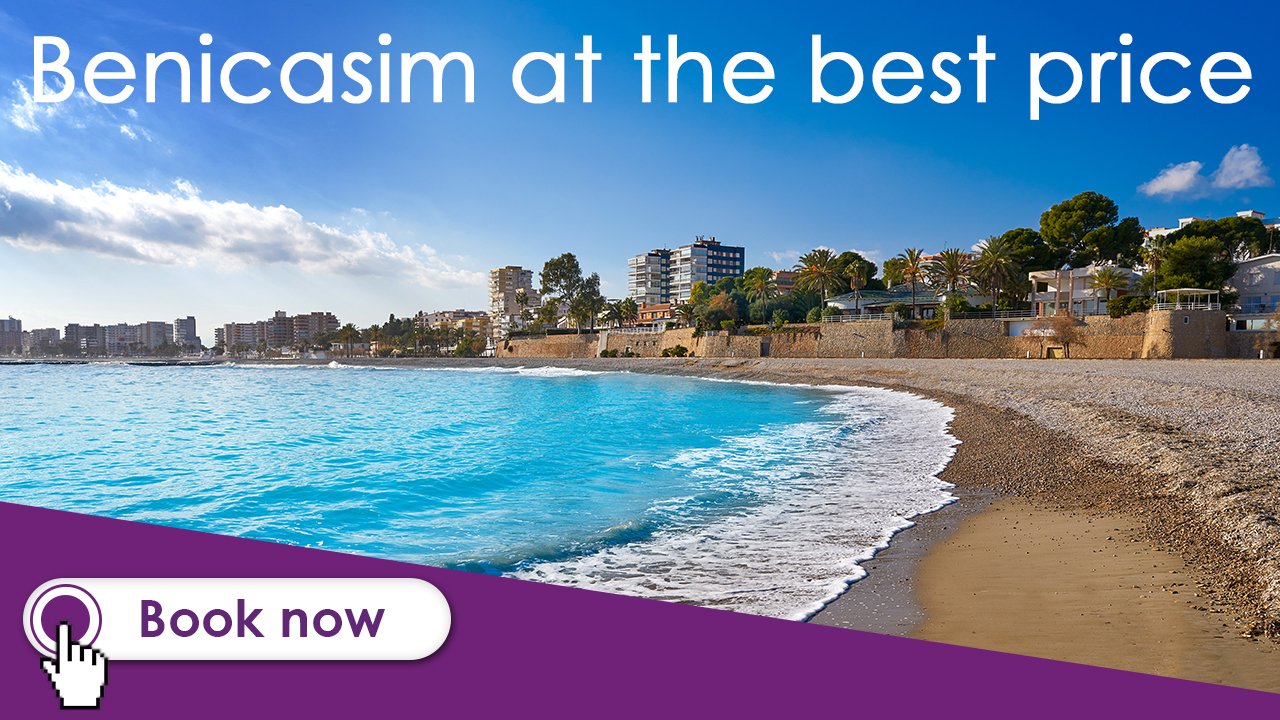 After 138 years of trains at the edge of the sea crossing the coast that connects Benicàssim with Oropesa, in November 2003 the old railway line was set back several kilometres inland to allow the passage of faster and heavier trains embracing the new times. In its place was an ideal space to enjoy the coastline and a meeting point for the residents of both fishing municipalities.

Mount Bovalar merges with the sea giving rise to a rugged landscape that serves as the setting for the route. The difficulty of the route is low, which makes the Vía Verde del Mar a fantastic alternative for outdoor leisure for all ages, even those with reduced mobility.

Along the way, in addition to the views, you can enjoy bathing in the small beaches and coves that dot the coast and get to know the interesting historical heritage of the area with some sites and monuments that enjoy the awards for, asset of cultural interest (BIC). In addition, the route is equipped with rest areas and bicycle parking so that you can comfortably enjoy your excursion. 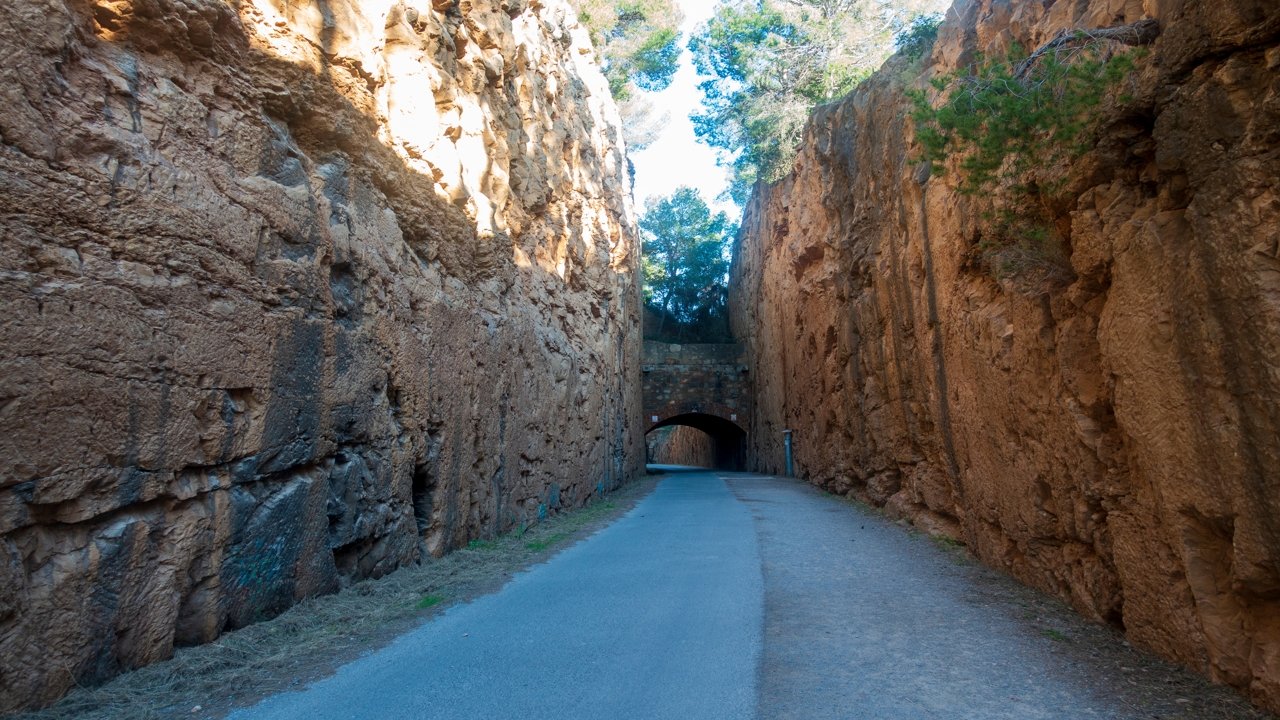 The best option to travel the distance that separates both municipalities is the bicycle. The firm ground allows the cycles to circulate comfortably, alternating asphalt sections with smooth terrains of fine compacted gravel.

Whether you start the route from Benicàssim or if you do it from Oropesa del Mar, both municipalities offer you the bicycle rental service so that you do not have to worry about anything. Have you heard that you never forget how to ride a bike? Why not prove it? 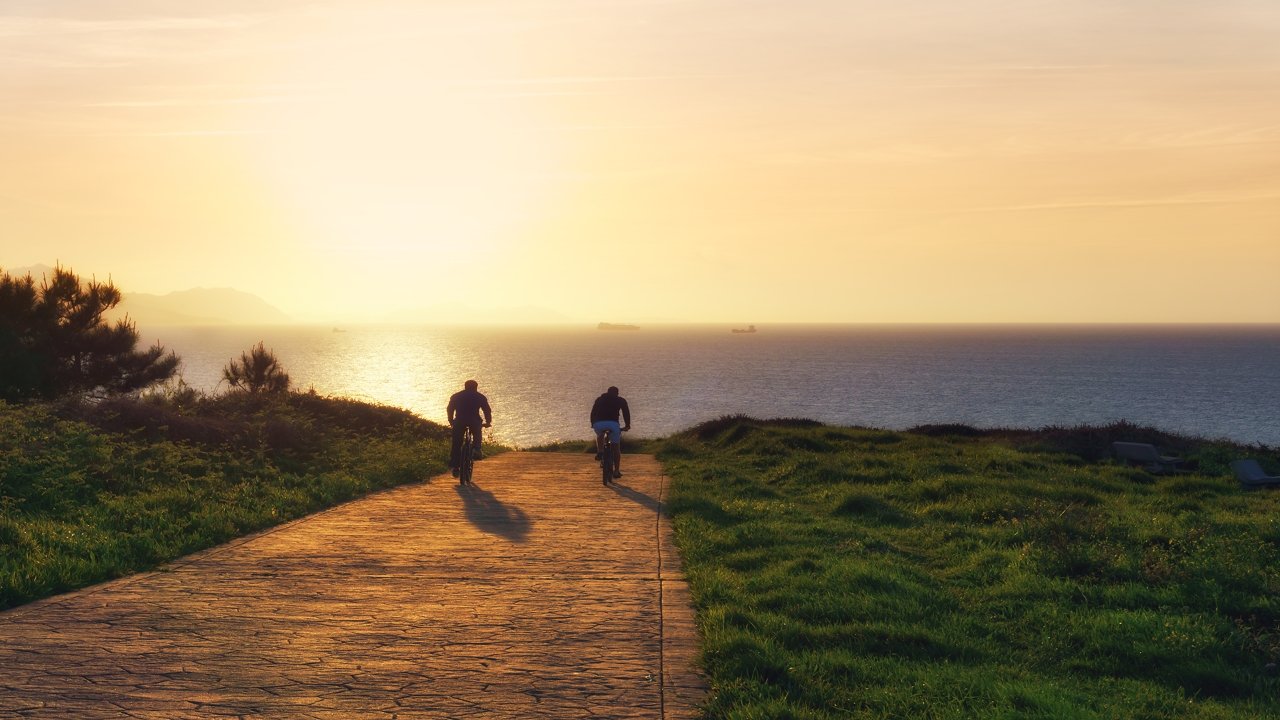 The Km 0 of the Via verde del Mar is located in the town of Benicàssim. The start of the route begins at Voramar Beach, next to the rest area of the old Las Villas Station, at the northern end of the urban area of Benicàssim. Access to this point takes place through Termalismo street.

The first steps of the route leave behind the impressive panoramic view of the town's beaches to meet the first part of the Sierra de Oropesa that enter the sea. That capricious orography caused the train to dig two colossal trenches with walls in the rock that will only be an appetizer to the many that can be seen along the way. Crossing the gloom of both gorges appears the first viewpoint to the coast where you can start enjoying the Mediterranean

The route continues parallel to the sea, crossing the old trenches and viewpoints to the watchtower of Colomera (BIC) on the Roca del Gegant. A perfect point to regain strength and keep enjoying the views of the sea before traveling the Renegá straight line and taking a dip in one of its small coves.

The road continues winding along the coast with different rest areas and viewpoints. The Torre de la Corda (BIC), which used to serve to guard the coasts and prevent the population from the arrival of Berber pirates, stands on the right side of the road and is accessible through a small path that you should not ignore if you want to do one last stop before entering the famous Bolavar tunnel and leaving Barranc de la Dona behind.

The end of the route is near. In the background you can see the town of Oropesa del Mar and to access its marina you have to cross through the metal bridge. Enjoy Oropesa!

In Benicàssim we have at your disposal the 4-star Hotel Trinimar, and on the front line of the Heliopolis Beach. An idea place specially dedicated for families where you can gather your strength after this great adventure you have all enjoyed together. Can you think of a better family plan? 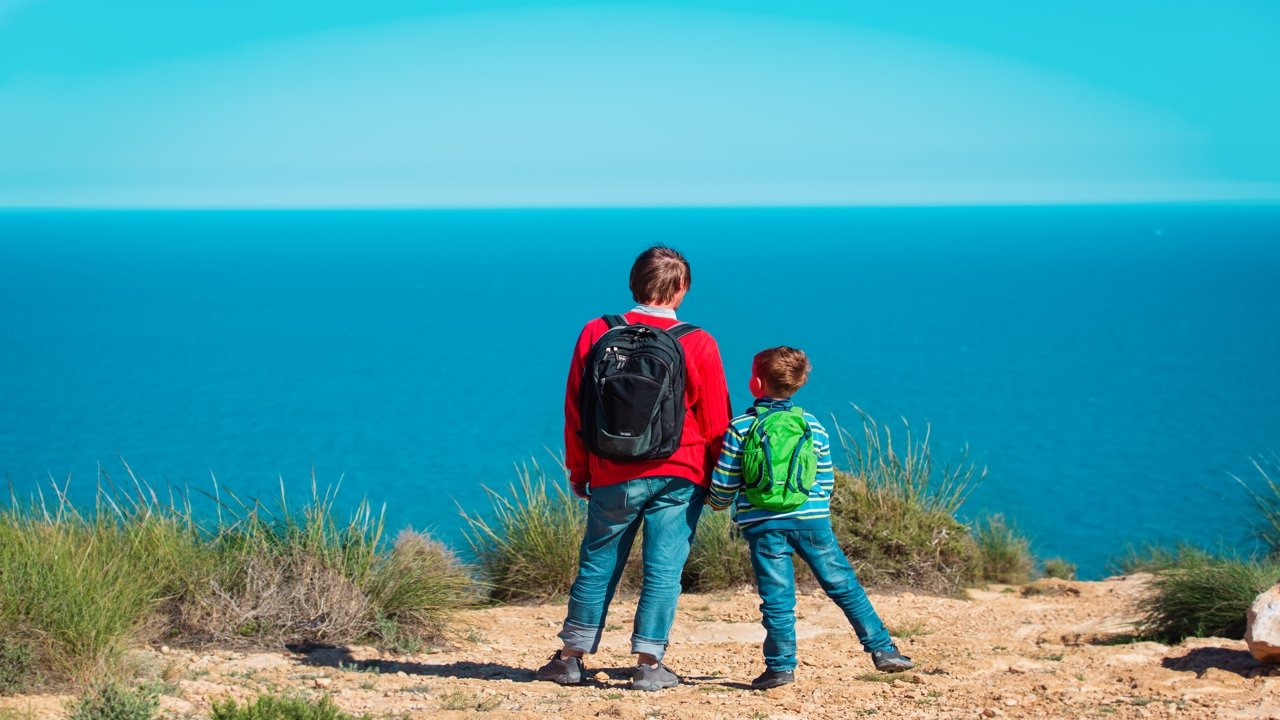 Oropesa del Mar sounds like a holiday. The path from this municipality begins in the rest area of Calle Tramontana, next to Playa de la Concha and descends through the marina, leaving behind the Iberian deposits of Oropesa la Vella and Cala del Retor to begin the journey.

Although there is a path that connects the two mouths of the tunnel between the pines, the route continues to exchange the light of the Mediterranean with artificial light under the slopes of Mount Bolavar for more than 600 meters from the tunnel until reaching the so-called Barranc de la Dona. 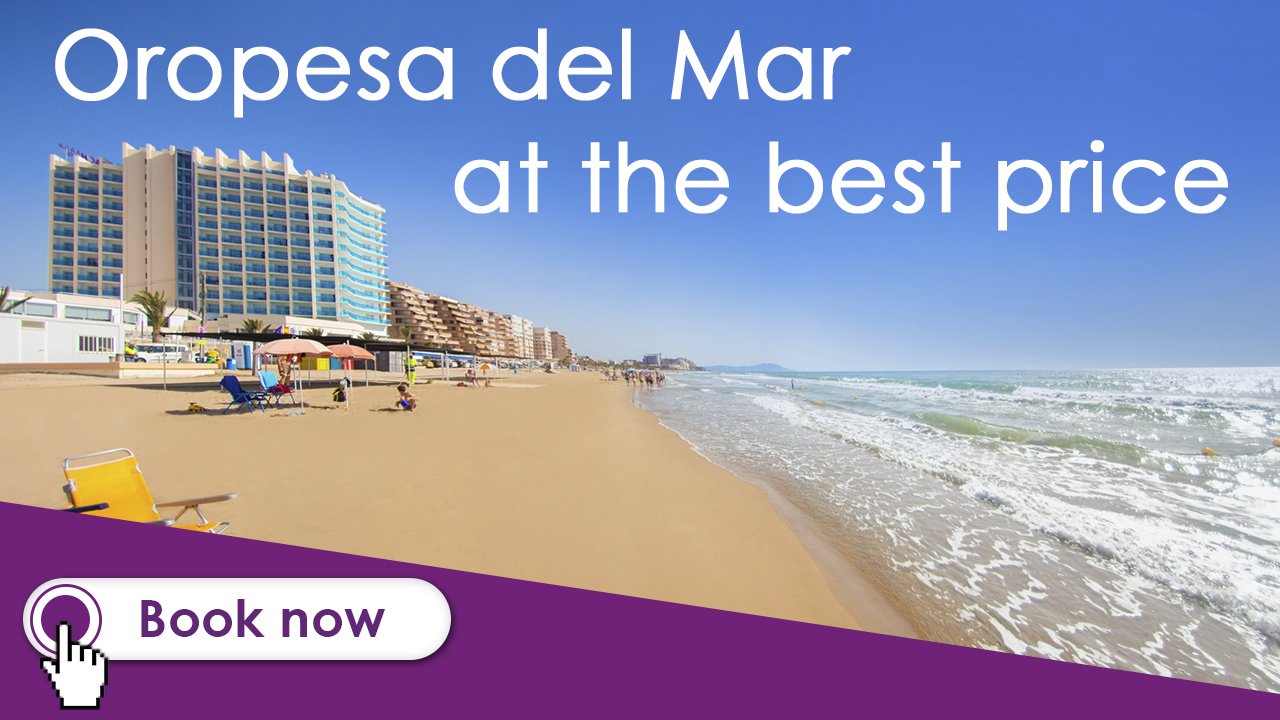 In the surroundings of Renegá, the mountain range moves away from the sea, entering the peninsula. The Via Verde takes a long straight line that occupies the plain released by the mountains. The path is covered by a leafy pine forest dotted with olive trees and, carobs among the thickets, and from it, a multitude of small paths branch out that go under the dome of branches until reaching the seashore so that you can immerse yourself in its crystalline waters.

The route continues through the old trenches of the train, challenging the imposing cliffs of the Moro and Gegant rocks.

The last section, nearly in Benicàssim, runs under the pine forests until reaching the Les Platgetes area, an area with magnificent views of the neighbouring town and shady areas where you can rest and enjoy the sea breeze.

In Oropesa del Mar, you can stay at the 4-star superior Koral Beach Hotel, located on the front line of Morro de Gos Beach. A hotel especially recommended for adults in which to disconnect after having enjoyed a good dose of activity on this fantastic route. 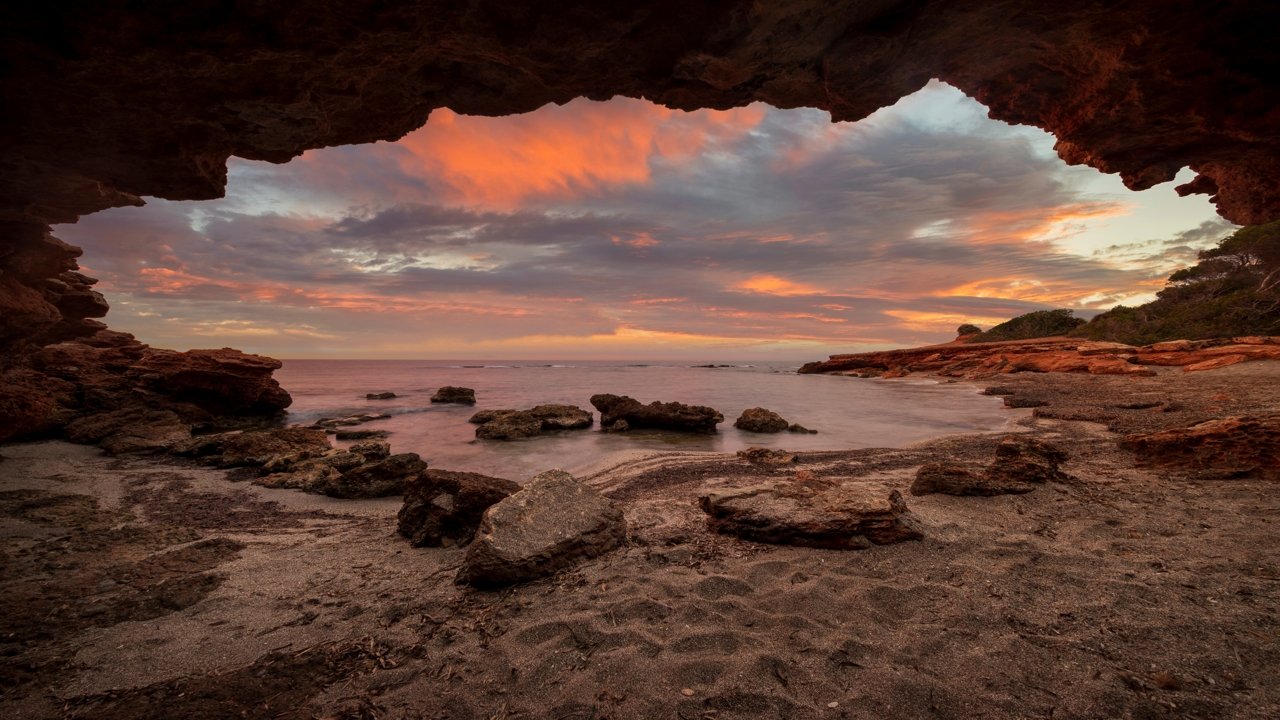 Check our map and plan your route

Stay at the Trinimar Hotel in Benicàssim or the Koral Beach Hotel in Oropesa del Mar, organize your perfect plan and don't miss a thing: 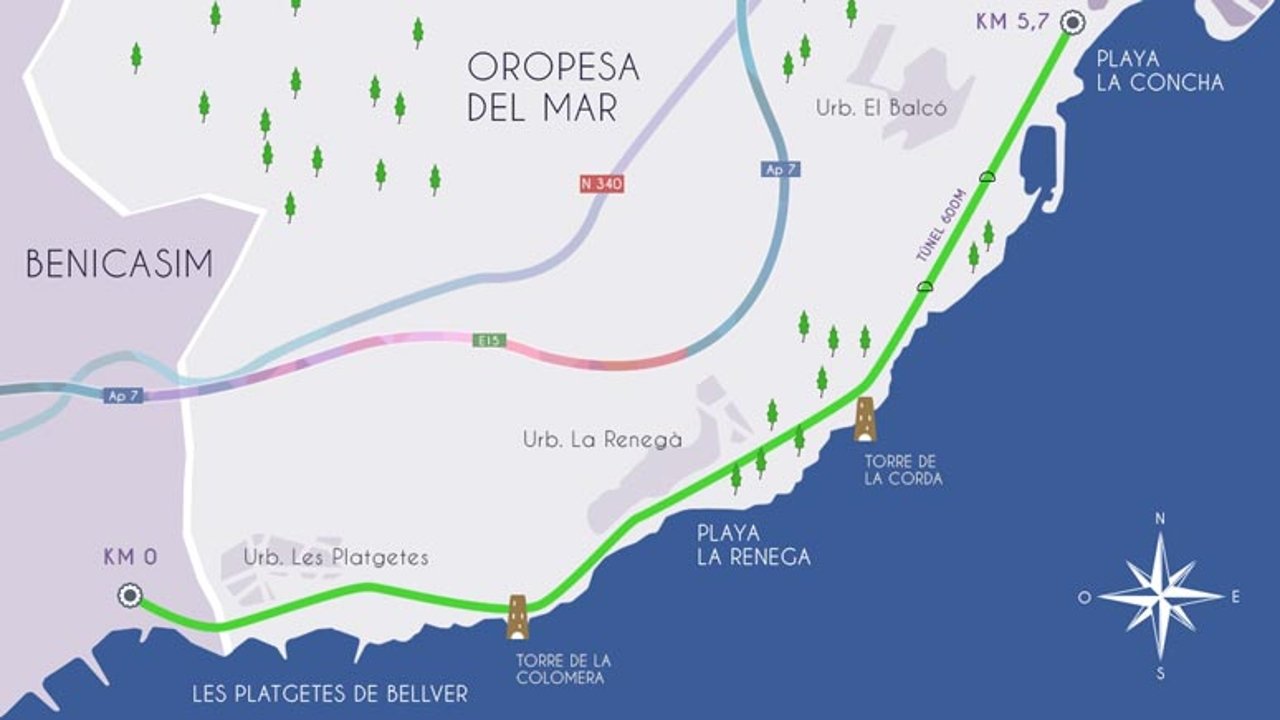 Other Vias Verde, a way to rediscover our landscapes in Spain

In Spain there are almost 3,000 kilometres of railway infrastructures that have fallen into disuse and have been converted, composing up to 121 cycling and hiking itineraries within the framework of the Vias Verdes (Greenways) Program, coordinated by the Foundation of the Spanish Railways.

If you choose to visit other destinations on the Spanish coast, we suggest the Via Verde (Greenway) of the Salinas de Torrevieja built on an old railway line that connected this important seafaring nucleus with the interior of the province of Alicante and that today runs through the salt lakes that extend through the landscape surrounding the Hotel La Zenia.

Also, if you travel to La Manga del Mar Menor, from our Hotel Galúa, you will be able to cross the Campo de Cartagena Greenway, built taking advantage of the unfinished Murcian regional railway. The journey crosses the orchard between fruit trees and terraces in an area with a long agricultural tradition. 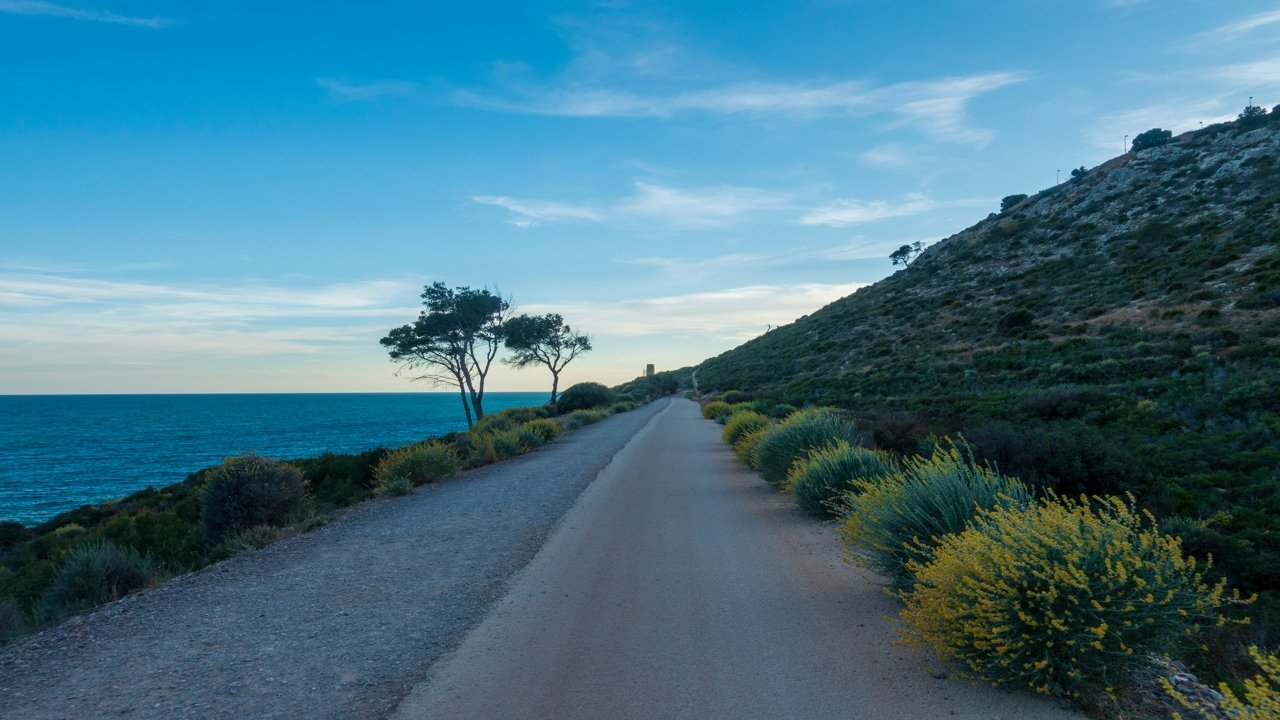 Have your desire for the sea awakened? Come and visit this charming corner of the Costa de Azahar, stay in one of our hotels in Castellón and follow the spectacular natural route of the Vía Verde del Mar. 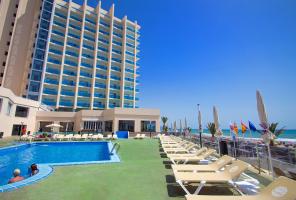 Beaches
Discover the beaches and coves of Oropesa del Mar