The Town Hall of Benidorm has once again hosted the gala for the XXVI Christmas Window Dressing Contest, organized by the Department of Commerce in collaboration with the professional associations of the sectors involved.

Once again Servigroup Hotels has managed to win one of the prizes awarded by the contest in the category of hotel establishments. In this twenty-sixth edition it was the Venus Hotel in Benidorm that won the third prize in this category with a spectacular staging that takes you straight to Santa Claus’s house, where next to the warm fireplace is an endearing armchair in which becomes the best seat for a great Christmas photo. A whole trip to Lapland to live all the magic of Christmas.

The Christmas decoration chosen by the Hotel Venus this year where nothing is lacking, with Santa's sleigh, sacks of gifts, a large Christmas tree and a mailbox with all the letters he has received throughout the year with the best wishes for the coming holidays.

The hotel has involved numerous hotel staff, who each year join forces to prepare a fantastic Christmas decoration with which to surprise their visitors. A chimney made of cork panels, a wooden sled, a post box made of bricks, endless materials that, with imagination, good ideas and tenacity at work have resulted in a decoration with a well-deserved prize.

The director of the Servigroup Venus Hotel, Lola García, and the housekeeper, Encarnación Gil, collected the third prize, in a gala that was accompanied by Christmas carols that were performed by the choir of the Societat Musical La Nova.

Each of the hotels of Servigroup strives to offer the best Christmas atmosphere through its decoration, by using imagination and originality with proposals that also include recycled materials that become incredible structures that foster the spirit of these fiestas. 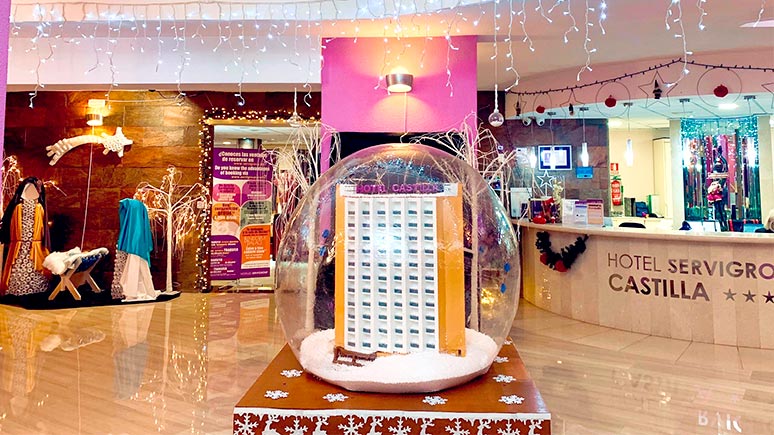 On the other hand, it should be noted that Servigroup Hotels has also once again sponsored a first prize of the event, consisting of a two-night stay for two people on a full board basis at the Servigroup Koral Beach in Oropesa del Mar.

After the awards were given to the different categories of restaurants, hotels, associations and shops, the mayor of the city, Toni Pérez, closed the gala with words of thanks to the participants, as he indicated that “shops, hotels, restaurants and establishments of leisure, give light to our streets”, becoming “the soul of the strength of this town”.

Likewise, the Councilor for Commerce, Lorenzo Martínez, congratulated the “hard” work done by the jury “in the face of such a difficult choice” and also thanked the participation in the gala of the students of the Second Course of Commerce, Marketing Technician and Publicity of the IES Pere Maria Orts and Bosch, since they were in charge of conducting and organizing the staging of the gala.