The hotel chain Servigroup has extended the agreement it has with the Benidorm Beach Volleyball club, becoming the main sponsor of the senior men’s team who will sport the hotel chain’s logo. It will also continue to sponsor for a further year the senior women’s team who plays in the first división as well as the rest of the youth academy teams.

This year the agreement includes four sports scholarships for the most disadvantaged families of the academy teams, covering 50% of the expenses with the club. 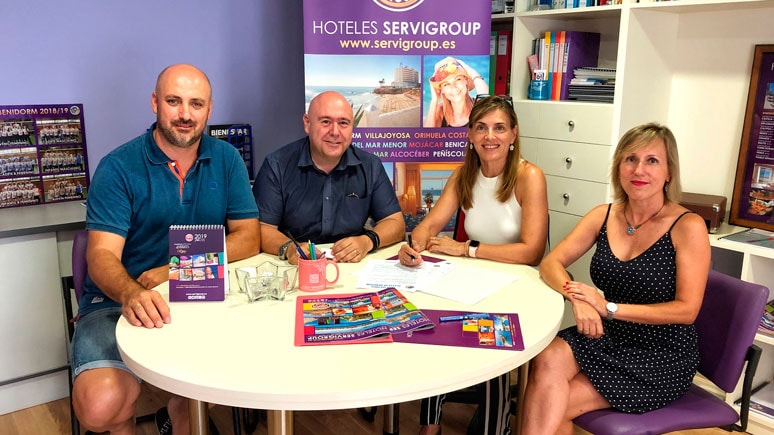 At the signing of the agreement, Natalia Caballé (Servigroup Corporate Image Manager), the club’s president Mario Rodríguez, secretary and trainer Ramón González and Pepi Llinares from the hotel chain’s advertising deparatment were all present.

Last year, the senior men’s team were the winners of the national first division, so this year they will play in the elite national division participating in the Superleague 2. Meanwhile, the senior women’s team was ranked 4th in the national division group B last year. The men’s and women’s youth teams and the girls under 12’s scored good rankings in the Spanish Championship and the rest of the teams have also been winners in various championships, both regional and Federation Cup, among others.

The club dates back to 2009 and throughout its course it has emerged as one of the most important clubs of the Valencian Community, with a long list of victories at both national and regional level. It currently has 12 federated teams and a team of more than 200 players between the ages of 7 and 35 yrs.

The club has made a star signing this season as a legend of discipline joins as club coach. Raúl Mesa (olympian and world champiuon) will train the senior men’s and women’s teams this season. Raúl is also coach of another of Benidorm’s Volleyball teams, the Poniente Beach Volleyball Club which operates during the summer season on the Poniente Beach.

The next indoor season 2019-2020 will begin this September, so fans can attend the Raúl Mesa Pavillion in Benidorm to watch the live matches and cheer them on. True to its support for local sport, the hotel chain wishes them the best successes for this season and for the big matches the Servigroup mascot Delfi will be present to cheer on both the players and spectators.