Rev up those engines, the Harley Davidson Custom Alcossebre 2018 is here

The Well-known Harley Davidson, mythical American motorcycles with more than a century of history; machines that have left their mark and have become a culture, a feeling, an experience throughout the world, where hundreds of lovers of motorbikes enjoy and pay tribute to this iconic brand.

The success of the Harley lies in their personal aesthetic look, the unique roar of their engine and undoubtedly what Harlistas like the most, the thrill of riding a Harley; it is a feeling, a total experience, a lifestyle...

Driving one of these motorcycles means freedom, camaraderie, friendship, feeling of belonging to a family, it is not only speed but a nomadic spirit that seeks to know new and exciting places.

Therefore, on August 30th, 31st and 1st of September, you have an unmissable appointment at Alcossebre. If you are staying in the city or staying at the Hotel Romana, you should not miss the 15th Harley Davidson Custom Alcossebre Meeting 2018, an unbeatable weekend where you will be able to enjoy with the rest of the bikers all the activities organized by our friends the Harley Custom Maestrat.

In 1903 in Milwaukee two young people named William Harley and Arthur Davidson founded their craft motorcycle production company. The first year of the company's life they managed to manufacture 3 motorcycles, the first one was sold to a friend. Nowadays they currently manufacture some 270,000 motorcycles per year that are sold in 84 different countries.

Since its beginnings in the backyard of the Davidson family home, thanks to their unique motorcycles, they had more and more orders; in 1907 the production of this small workshop amounted to 150 units, and due to the Great War, this company would be named official supplier to the army, supplying motorcycles as well as other vehicles. After the victory of the Americans, the company expanded its activities to more than 67 countries.

In the 40s after the Second World War, the American ex-combatants once again took their old motorcycles out to American roads, destroying the armour designed for combat bikes and resulting in motorcycle choppers. 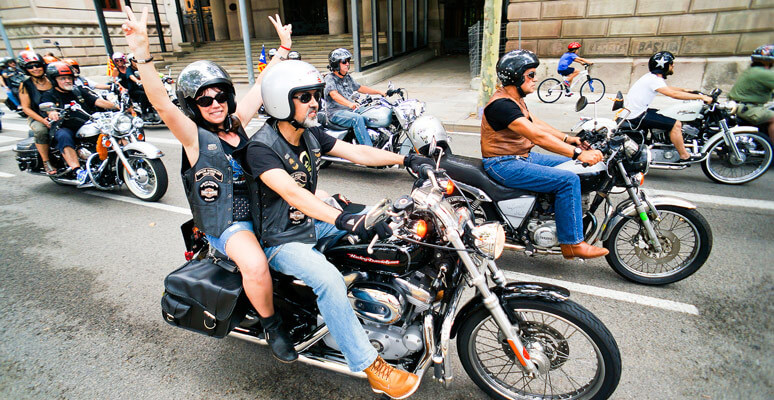 In the 1950s the Jeep brand took over Harley's role as the official army supplier, but Elvis, Rock & Roll and Hollywood with mythical films like Rebel Without a Cause and Easy-Rider marked an era and made custom motorcycles a legend.

Harley has been able to create brand culture with its motorcycles, it is a symbol of rebellion, a lifestyle with a special philosophy associated with freedom, camaraderie... which supports the 110-year history of the myth. 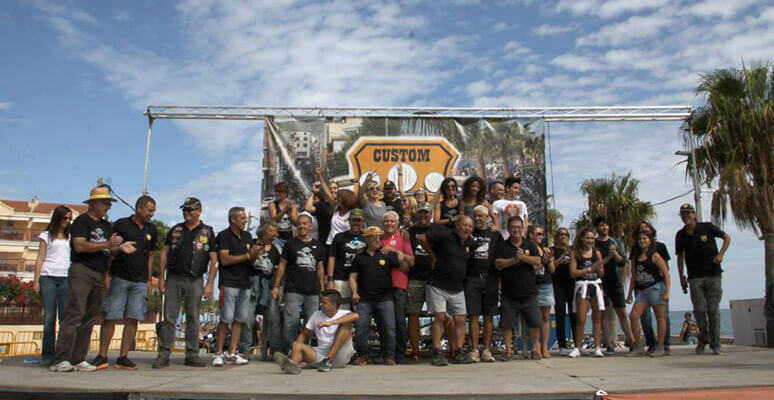 More than 15 years ago, a group of friends from Alcocebre began to meet and enjoy their great passion, Harleys, and formed their own biker club, the Harley Custom Maestrat.

The group has chosen a very successful name, Harley for the brand of motorcycles, Custom for customized, an English word that means personalization and implies that the owner of the motorcycle can modify and customize it to reflect his personality, and Maestrat for the region that It extends through the north of the province of Castellón.

So once gathered and chosen, these Harlista friends decided to create an annual meeting to be able to share and enjoy their passion for the engine; this initiative year after year has been consolidating and each time has more followers, becoming the mandatory summer event, with more than 1,700 registered last yearand more than 2,000 visitors which make it one of the most important biker concentrations in Spain.

Year after year this meeting has had the support of the Alcossebre City Council and Alcalà de Xivert, and it is one of the summertime meetings in the localities since there is a great atmosphere on these days; an ode to retro and vintage, rock music, bikes and friendship. 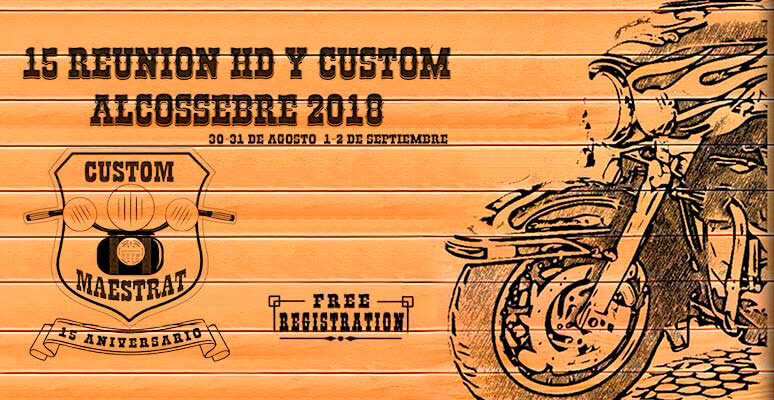 Enjoy 4 days full of activities designed specifically for your pleasure, this year is also the 15th Anniversary of the concentration, so it really will be an event not to missed, as the celebrations will be amazing.

This all kicks-off on Thursday, 30th August with a live performance from the unique Graham Foster, British guitarist, singer and composer, who has performed with M-Clan, The Vargas Blues band, Kiko Veneno... and will animate us with his band and his rock songs, this will be in the enclosure located in the Paseo Marítimo de Alcocebre, right in the center, just in front of the beach and next to the Tourist Information Office of the municipality. 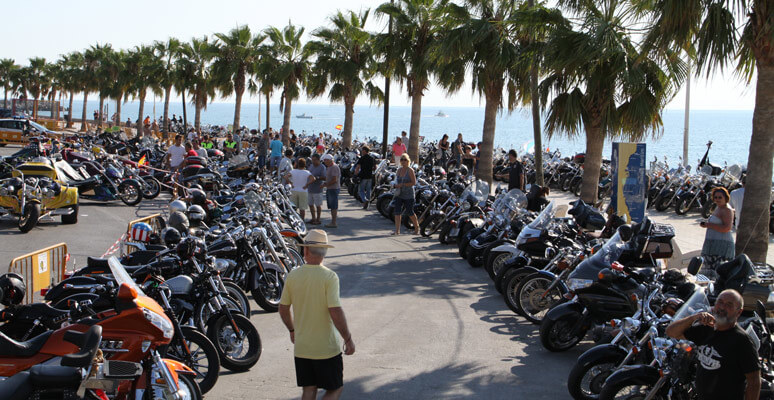 On Friday, August 31st, from 5:00 pm, the actual concentration begins with the opening of free registration (the only requirement is to bring a custom motorcycle) and the start of the 15th Harley Meeting. That same afternoon the atmosphere and the excitement of the beginning will seize you when meeting up with friends, seeing the beautiful motorcycles and prepare for the night, where at 22: 00h you can proceed to a dinner consisting of ham, bread and tomato, but not any tomato but "tomaca de penjar" typical product of the town, which consists ofprotected designation of origin and It is so tasty that it will captivate you, a dinner enlivened with music after which you can enjoy two live concerts by Surgery Band and Herbasana Rock that will get you dancing to the purest Rock & Roll. 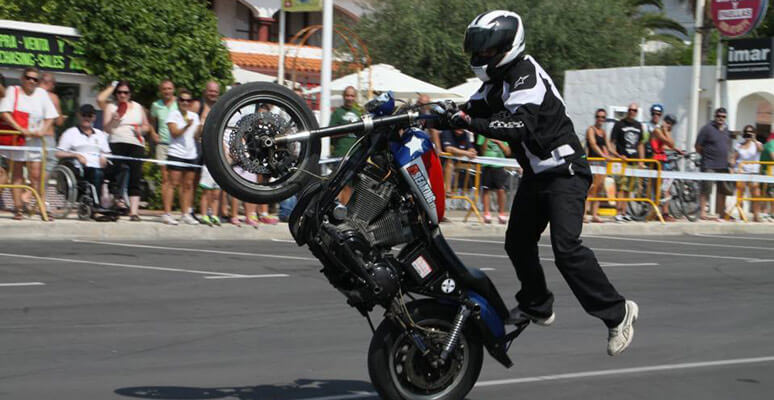 On Saturday, September 1st, after a night of dancing and rock & roll, the morning will be free to enjoy the beautiful beach of Alcocebre, to rest to gather your strength and enjoy the rest of the scheduled activities. At 10: 00h the reopening of registrations for the newcomers, at 7:00 p.m. tourist route to Alcalà de Xivert, a neighboring town in full festivities, where there will be an exhibition of motorcycles en route. Also, on the Avenida Heroes de Marruecos in Alcalà de Xirvert will be the Stunt Show, extreme acrobatics show (the art of, inverted and acrobatic wheelies) by Edu Rodríguez, a great talent of the stunts in Spain, a specialist on 2 wheels and a great promise of one of the most spectacular categories in the world of the motorcycle, stunt riding and winner of competitions such as the Motonavo Stunt Games in Spain or the Evotech in Italy. After about 10:30 p.m., a lamb stew will be served to all those registered and the frantic rhythm will continue with the stellar performances of The Hawks, a great Valencian band of rock-country-R & B and Rockabilly with which you will not stop dancing and Ruth Baker Band with its aesthetic Pin up and its songs with a mixture of influences, garage, rock-soul -blues and Glam-rock which will give you goosebumps. Also, during the break will be the act of acknowledgments and the corresponding delivery of diplomas to all those who have had a prominent role in the collaboration with the organization, for the implementation of this 15th meeting of Harley Custom of Alcocebre. 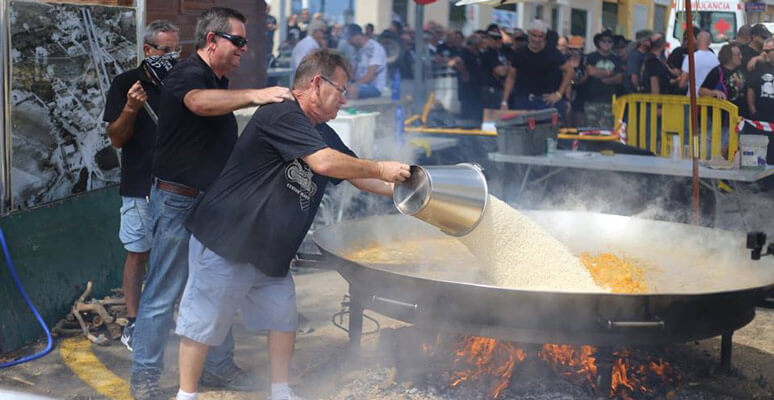 After a night of fun and Rock & Roll, on Sunday once again registration will be opened, for the laggards at 09: 30h, continuing with a lunch of a giant roll (for those enrolled) and a new exhibition Stunt Show at 11: 00h in the Paseo Marítimo, another route through the municipality and a monumental paella as the culmination of partying and a farewell.

Remember that the registration is free and the first 500 participants will be given a t-shirt of the event. Throughout the weekend you can enjoy the atmosphere, good vibes, camaraderie, music and much roar of motor ... and in your free time you can enjoy an incredible motorcycle market where you will find the latest fromthe bike industry and accessories, a sensational exhibition of transformed bikes that will surely surprise you and the most striking American cars. All this for you to enjoy the world of the motor next to the sea, in Alcocebre, Costa de Azahar.

So, don’t forget your date with Alcocebre and the world of Harleys this summer.

Now you know, so get your motorbike ready and enjoy this fantastic experience!