The department of Caldas (Colombia) has granted José María Caballé, president and founder of Hoteles Servigroup, the Order of the Caldas Medal in the “Great Shield” category, in recognition of his outstanding work in favor of tourism and educational development of the region, a university and coffee hub of Colombia with more than 900.000 inhabitants, that boasts in the capital, Manizales, a Servigroup hotel.

The ceremony in which this medal was presented to José María Caballé took place on the 30th December at the Protocol Hall of the Government of Caldas. The hotelier was accompanied by the governor of Caldas, Guido Echeverri Piedrahita, who presented him with the award, along with his wife Ana María Jaramillo de Echeverri, and the mayor of Manizales, Carlos Mario Marín.

José María Caballé is the owner of the Hotel Benidorm, located in Manizales, which was inaugurated in 2012. He has been the promoter of the twinning that exists since then between the city of Manizales and the Spanish town of Benidorm, where Caballé has nine hotels. A fraternal link that has led Manizales to dedicate a public space to Benidorm with a square that bears its name and that shows different images of this tourist town of the Spanish Levante. Likewise, Benidorm also houses a square with the name of Manizales, as an example of this twinning by which both cities have shared various cultural experiences throughout this time.

Similarly, in the educational field, Caballé is responsible for the agreement that the Colombian academic organizations of the Caldas Region maintain with Servigroup Hotels, whereby Colombian students of the National Apprenticeship Service, SENA, travel to the hotel establishments that the entrepreneur owns in Benidorm (Spain) to study training courses in which to improve their knowledge in different areas of the tourism sector.

The objective of these training programs is to strengthen technical and technological training, immersed in the needs of the worlds culture in tourism, hospitality, customer service, gastronomy and tourism services to favour their growth and competitiveness as students.

For all of this, Caballé has been recognized for boosting the local economy of Caldas, generating employment and welfare, by integrating local communities into tourism activities. Likewise, with its contribution it has reinforced the competitiveness and quality of the hotel sector.

Sr Caballé's link with Manizales had already been made clear with previous recognitions. In 2014 he was appointed by the City of Manizales as Commander and Illustrious Son of the Colombian city. In 2016, he also received the Caldas Shield in the “Honor of Merit” category by the governor of the Colombian region of Caldas. A year later, in 2017, he was granted a new recognition, this time by Cotelco, for his support in the development of tourism in Caldas, as well as for the generation of employment and greater social and economic growth of the region.

José María Caballé thanked the Caldas region for this distinction and said that...

“It is of great personal satisfaction, and as a hotelier to receive from the highest authority of the department of Caldas this recognition for my long and extensive, personal and professional relationship in the hotel and cultural sector of this wonderful department of Colombia, in which, due to the human and receptive quality of its inhabitants, one is at home”. 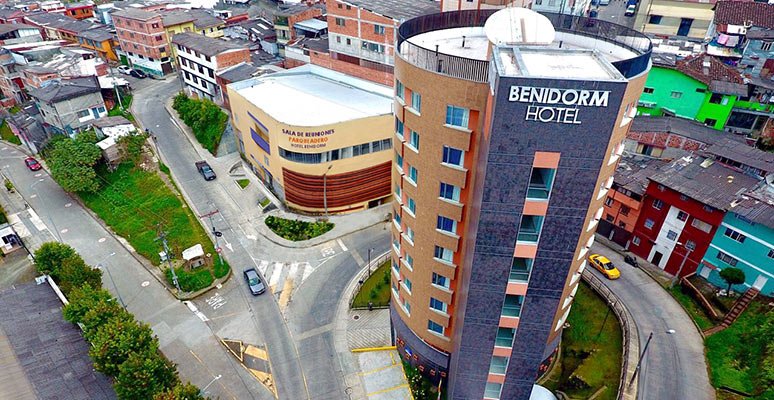 Caldas is one of the thirty-two departments that, together with Bogotá, Distrito Capital, form the Republic of Colombia. Its capital is Manizales. It is located in the center of the country, in the Andean region, limiting to the north with Antioquia, to the northeast with Boyacá, to the east with Cundinamarca, to the south with Tolima and Risaralda and to the west with Risaralda. With 7888 km² it is the fifth least extensive department - ahead of Risaralda, Atlántico, Quindío and San Andrés and Providencia, the least extensive - and with 125 hab/km², the sixth most densely populated, behind San Andrés and Providencia, Atlántico, Quindío, Risaralda and Valle del Cauca.

It belongs to the coffee axis and the Paisa region. It was created in 1905, the result of the reform of the political-administrative division proposed by General Rafael Reyes Prieto, who assumed the presidency in 1904. Until 1966, he comprised the territories occupied by the departments of Risaralda and Quindío, which were segregated. This union is known as El Viejo Caldas, El Gran Caldas or La Mariposa Verde.

Summer is synonymous with holidays by the sea. Are you going to settle for the usual? We offer you a list of the best coves and beaches in the province of Alicante.

The Costa Blanca offers you endless options when it comes to enjoying the sea. We all have our favourite corner and here you can get to know some of the most fascinating places in the area, so you can experience a different kind of summer.

The Canelobre Caves, visit the depths of the earth in Alicante