Come along to Peñíscola in September!

Just when the summer is coming to an end, and we still have the little ones on school holidays, neighbours from Peñiscola celebrate their popular local fiestas.

The Peñíscola Fiestas 2017 will take place from the 7th of September to the 17th of September. The motive of this festivity is to pay tribute to their patron saint known as Virgen de la Ermitana.

This devotion is expressed with the presentation of the Danses, traditional ancestral dancers that originate from the peasants of the city from which had frequent conflicts.

But perhaps what raises more attention to these fiestas in the province of Castellón is the huge thematic diversity during the days of celebrations. The tourists and the visitors can enjoy the concerts and brass bands in the festive tents. There are also many sporting events and competitions.

On the day of the 7th of September the crier will start the Fiestas of Peñíscola 2017 the citizens start with llamada a la fiesta. Every day the traditional sound of the bells you can hear and everybody meets at the Ermita de la Virgen.

The fiestas start officially with the nomination of the queen of the festival and her ladies of honour, during 10 days an enjoyable and fun time awaits you.

One of the most striking aspects of the September fiestas in Peñíscola is the offering of the flowers to the Virgen de la Ermitana, where all the tourists, visitors and locals enjoy the day together and meet at the town hall square where the parade starts to the recluse of the Virgen de Ermitana.

When they arrive the virgin will be presented with a bunch of flowers in honour of her and to celebrate the traditional danses that evoke the villages warrior and peasant traditions.

Another day it will be dedicated for all the Housewive's, it will start with religious celebrations and other events like parades, competitions and traditional dances.

A day is also dedicated to the older generation known as the day of the older persons to make a special tribute to them and make them feel young again.

The Children's day consists of a varied programme of activities, attractions, games and fun competitions. 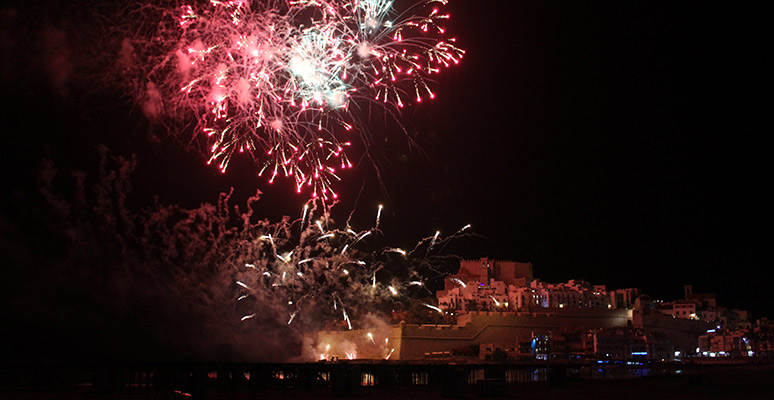 The visitors of the town of PeñÍscola also have their special day with the intention of making them feel very much at home it is called the Day of the Visitor, and this consists of a number of typical local products of the area are offered to them from the host of the festival. During the night the competition of Miss Turismo will also take place.

The Moors and Christians are a grand part of the fiestas unlike other villages like Benidorm, Mojácar, Orihuela and Villajoyosa, where they are usually celebrated separately. The Moors and Christians of Peñíscola are celebrated on the final days of the fiesta in and around the old town, to remind us when the moors gave up before the arrival of Jaime I.

The Christians was the winners without no fight, like the Moors and Christians in Mojacar they celebrate and commemorate a triumph without blood. 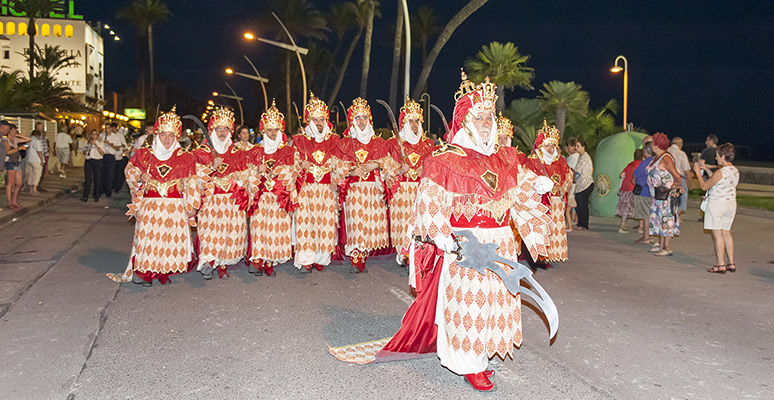 All our guests that are staying at our Hotel Papa Luna in Peñíscola during those days will only be minutes away from all this atmosphere and fun from the town´s magnificent festival. And for all of you that are staying at the Hotel Servigroup Romana, we recommend that you dedicate some time to visit this wonderful festivity.

Summer is synonymous with holidays by the sea. Are you going to settle for the usual? We offer you a list of the best coves and beaches in the province of Alicante.

The Costa Blanca offers you endless options when it comes to enjoying the sea. We all have our favourite corner and here you can get to know some of the most fascinating places in the area, so you can experience a different kind of summer.

The Canelobre Caves, visit the depths of the earth in Alicante