Villajoyosa is prepaired for the Festival of Moors and Christians

As every year, at the end of July we all have an irrefutable date with the Alicante city of Villajoyosa. The reason for this is the popular Moors & Christians fiesta. Seven days in which night time parties and traditional dances in ranks are accompanied by the most traditional parades.  All this to the rhythm of a musical group that travels through the streets of Villajoyosa, creating at the same time a unique atmosphere that always accompanies the good weather. 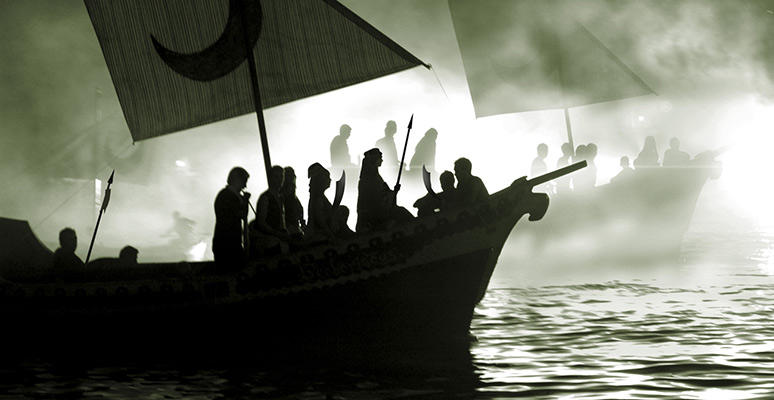 In Benidorm our main Tram train station (regional railway line) fills with Benidorm residents and holidaymakers who also go to Villajoyosa to enjoy the traditional historical fiesta. So, if you are staying at any of our 9 Servigroup Hotels, access to our neighbouring town by car or by train is within direct reach in just a few minutes.

From our Hotel Servigroup Montiboli in Villajoyosa you can reach the town centre even quicker, either by car or by TRAM for which there is a stop very next from the hotel.

For the majority of participants and guests of the Moors and Christians Fiestas of Villajoyosa 2016, the most symbolic act will once again be the disembarkation that consists of an emotional tribute in honour of Saint Marta, the Patron Saint of the Alicante town.

The representation of the disembarkation of the Fiesta of Moors and Christians of Villajoyosa originates back to the XVlll century and consists of the staging of an attack on the Villajoyosa coastline by Berber pirates led by the dreaded Zallé-Arraez.

The disembarkation of the Muslim troops represents a fierce naval battle in which the Christian side remains on guard on the sand of the Playa del Centro de Villajoyosa at the same time that a huge number of enemy ships approach the east side. 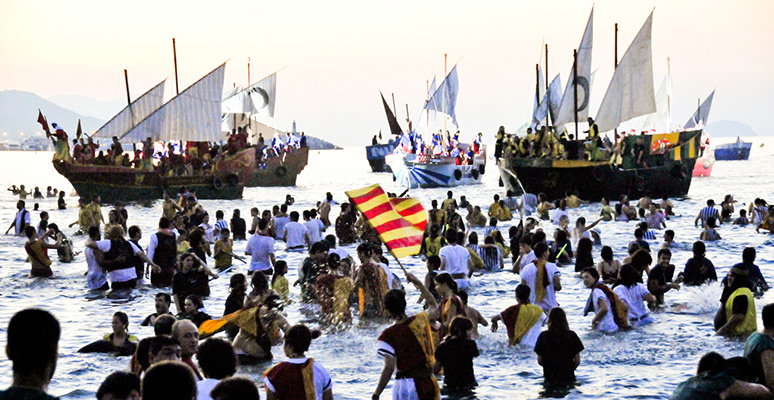 This fact took place almost half a century ago, attaining recognition of Santa Marta as the Patron Saint of Villajoyosa . According to legend Santa Marta helped prevent many soldiers from perishing in defence against attacks from enemy pirate ships and despite the fact that if the managed to reach land and occupy the castle, in a few hours they were defeated by the Christian army and left fleeing once again by sea.

It consists therefore of an undisputable victory, which for many would have been impossible to achieve without the heroic help of its great patroness.

The depiction could not be more moving, with feelings of great anticipation especially on the part of the Villajoyosa town folk who commemorate this historic event year after year without ever losing its true significance.

It is for this reason that once again the fiesta of Moors & Christians of Villajoyosa 2016 will be celebrated as usual from July 24th to 31st.

On the other hand, it is this popular representation that has given rise to the Moors & Christians of Villajoyosa being declared a fiesta of International tourist interest in 2003, and for this reason, the traditional disembarkation has become an event of enormous tourist attraction.

With a schedule true to the historical events that mark its cultural tradition, Villajoyosa offers a complete programme of enactments that usually begins with a musical presentaction with the more popular bands, and the next day with a great parade in which the armies of the moors pass through the main streets of the town to the rhythm of an impelling musical band. 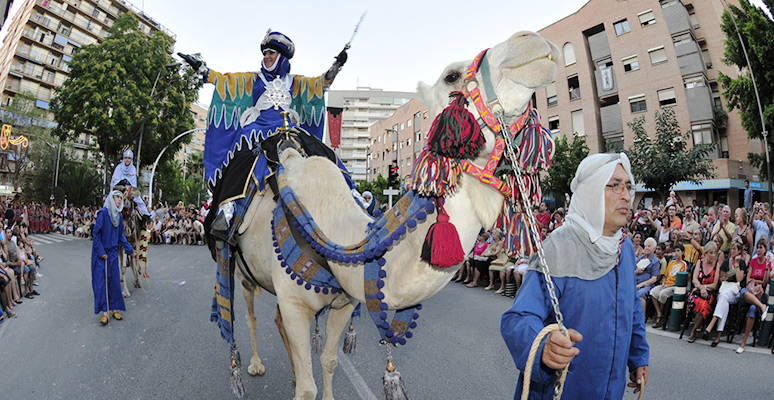 In this spectacular disembarkation of Moors and Christians of Villajoyosa, usually celebrated during the early hours of July 28th there is no shortage of elegant firework displays with powerful cannon fire launched periodically throughout the evening prior to the attack. There is also a constant presence of fire as well as music and the sound of drums that will undoubtedly thrill you one year more, all this with the vital presence of Santa Marta at the front of the representation. 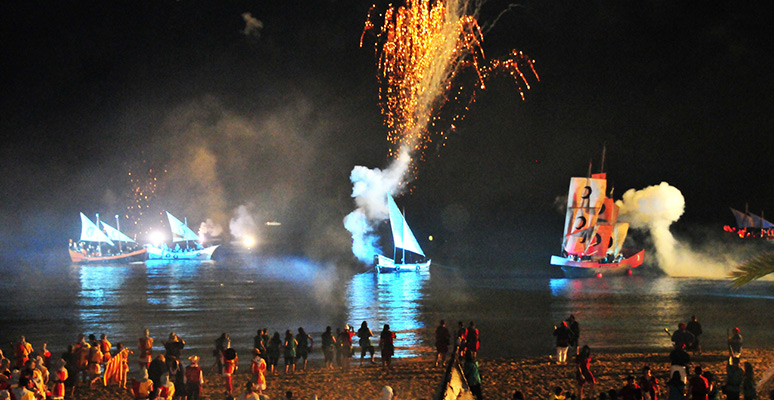 But in addition to this great event, during this festival you can also find other programmed activities such as the popular competitions of paellas in which can be found the most typical dishes from both sides (Christian & Moors) as well as parades in which the bright colours and undeniable glamour do not go unnoticed. All this with an artistic quality that is clearly reflected in the costumes and parades that pass through the streets of Vilajoyosa throughout seven days.

Remember, if you are going to be staying with us at any of our 9 hotels in Benidorm or at our Hotel Servigroup Montiboli in Villajoyosa during the last week of July, a visit to the Moors and Christians fiesta will be unforgettable.

We’re waiting for you…!!