We are Ana and Miguel, a couple from Aragon who are passionate about travel and tourism. We love getting to know in depth the places that we visit, but the truth is that on our last holiday, we went to the Hotel Romana in Alcossebre (Castellón) just to rest, unwind, enjoy the hotel’s facilities, relax for a few days, eat well and re-charge our batteries in comfortable familiar surroundings. However, after a few days we couldn’t resist and asked in reception what activities we could do to see a bit of the area. The information was thorough and thanks to the advice given, we ended up contacting a small Castellon-based active tourism company called Itinerantur. Following an unforgettable morning we decided to share our experience with the hotel staff who suggested that we write it down in order to encourage other guests to get to know Alcossebre and its surrounding as we had done. We have tried to be expressive and at the same time realistic in order to convey our feelings and this is the result. We hope you like it! 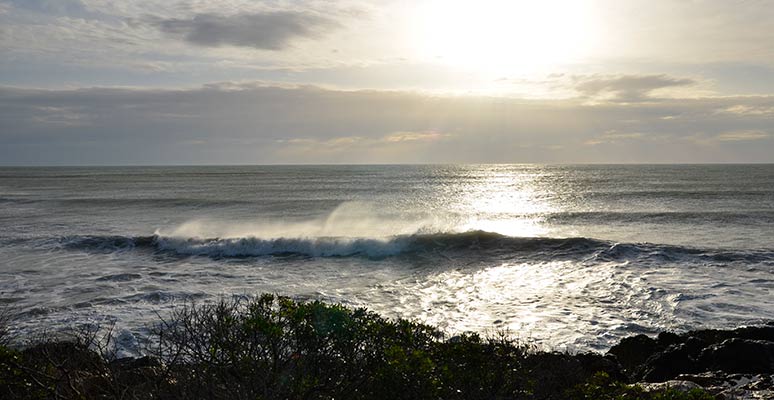 We never imagined that Serra d’Irta, this Natural Park, north of Alcossebre that a friend had mentioned to us in passing, would symbolize the Mediterranean coast so much and leave such an indelible mark. Perhaps it was because of the passion that the Intinerantur team transmitted throughout every minute. Thanks to them, we have been lucky to experience something different to what we thought we would find in Castellón.

In the car on the way to the entrance of Peñiscola’s Natural Park, we looked out to the horizon trying to guess what was awaiting us. Already at the park was Belén our guide (or in her words, translator of landscapes) who met us at the meeting point, raring to go.

First we did some leg warm ups for the easy journey along 15 Km of unspoilt coastline from Peñiscola north to Alcossebre south and then Belén wasted no time in explaining how protected the area was and its importance as a unique territory of the Valencian coast. It seems that is practically the last stretch of wild coastline on the Spanish Mediterranean from France to Andalusia. Wow! 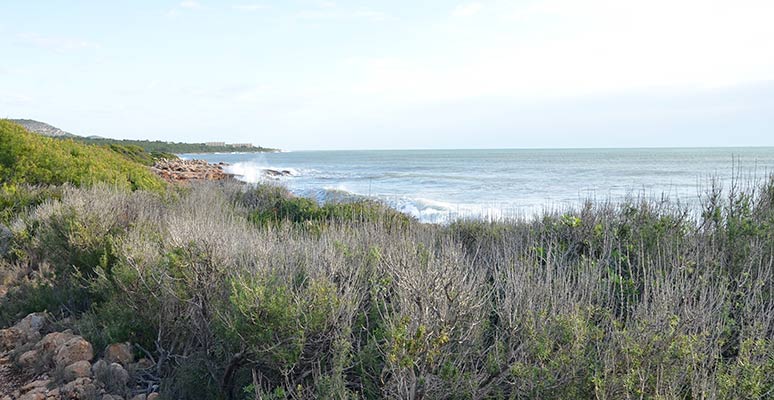 Whilst we were walking, we could see, hear, smell and even taste the sea, we also caught a glimpse of the Columbretes islands (they remain pending for our next visit). Before we realised, we found ourselves in front of an enormous eleven metre shadow, the Badum Tower, a spectacular watch tower defence against the Berber pirate attacks at the top of an imposing cliff of almost 50 metres, where unique flora species live. Some, such as the saladillas of Peñiscola only inhabit this area.

Walking always with the murmur of the sea as a backdrop, we come to another smaller cliff in the shape of a cove, with calm turquoise waters that contrasted with the dark blue Mediterranean. They explained to us how the limestone walls were formed, how from the same rock, fresh water springs of huge levels that filled the coastline of the Marine reserve with life began to sprout and we remained in silence observing the gentle waves that splashed on the rocky shoreline. We even managed to take a drink a drink of fresh/salt water that emerges at the foot of the beach. It is clear that the day was about trying new things. The beauty and the tranquillity of that place literally absorbed us. We are not surprised that the pirates came here to anchor their boats for so many centuries.

We continue along paths, coves and unspoilt beaches such as Pebret or Argilaga cove, crossing micro reserves of rare flora that is in danger of extinction, we arrive at a beach made of sea shells where we had a swim and to our surprise, Belén took out, (we don’t know exactly where from) a lunch of local products, bread, cold meats and local cheeses, fruit and vegetables of the season, jams and juices and a nice chilled wine, all produced in Castellón. Our guide mentioned to us that the interpretation of landscapes is not the same without tasting the local culture. Quite right!

We continued with the journey and the Mediterranean mountain in all its splendour guided us through the southern part. As Belén told us, there is more diversity of plant life on a small piece of Castellon land such as this than in many entire European countries and this is something that not many people know… if they are not told. On arrival at Alcossebre, we stopped at the Paseo de las Fuentes to admire the springs that sprout between the parasols of the surprised tourists whilst we thought “we now know where all that water comes from” and we could not help but smile like naughty children.

Finally, just as we reach the hotel and before we say farewell to our guide (who was now more like a friend), hunger began to roar in our stomachs. The truth is, that nothing was lacking in making this the perfect morning. Well, maybe: if we could have taken a piece of Serra d’Irta... but, as Belén reminded us, the best memories are those that we keep in our photo album or even better, in our memory. 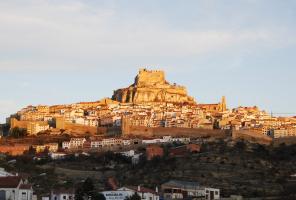 Visits and excursions Sports
From Peñíscola to Morella 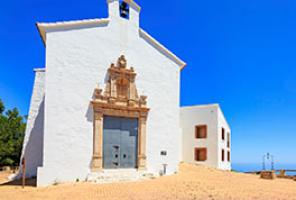